John Thamann, ever the reluctant hero, is recovering in his Jericho, Vermont home after a bus fire nearly claimed his life.  The driver was transporting two dogs on Gulliver’s Doggie Daycare bus Tuesday when a fire broke out.

Thamann acted quickly.  He smelled smoke, called the problem into his supervisor and pulled the bus over into a Burlington parking lot.  Flames emerged from under the hood, and rapidly began consuming the bus.  The terrified dogs became agitated and resisted attempts to be rescued.  Thamann braved the flames and managed to grab three-year-old Rufus, a Lab-boxer mix, who made it out of the fire unscathed.

Thamann sustained burns on his hands, back and head, and suffered minor smoke inhalation.  He valiantly tried saving the other dog, but it could not be coaxed out.  Thamann only abandoned his efforts to save it when he began blacking out. 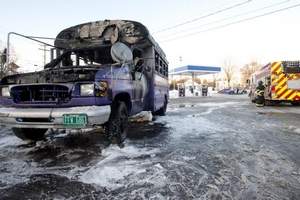 Gulliver’s manager, Amanda Poquette, said Thamann declined to be interviewed, but that he was feeling “okay.”  Beth Kelly, Rufus’ owner, said her dog had been released from the veterinarian’s this morning, having only suffered minor smoke inhalation thanks to Thamann, and is doing “very, very well.”

In a 2010 interview, Thamann said he only became a confirmed dog enthusiast after taking the job with Gulliver’s Doggie Daycare.

“To me, there’s something more rewarding about having a dog that didn’t welcome you — turn into one that listens to you,” he said.  “Most of the dogs here like me, and most of the dogs that don’t like me generally come around.”