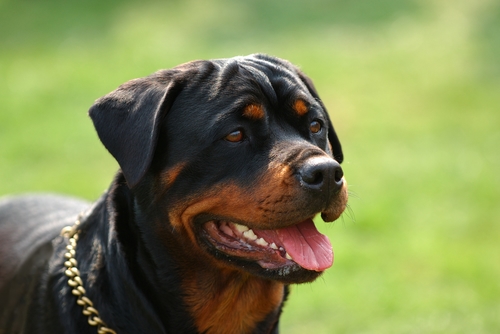 A Rottweiler alerted his owner to a naked man in his house early this morning in Miami.  At around 5 am, occupants of the house could hear commotion and dogs barking.  The homeowner grabbed his gun, and found a completely naked man trying to choke his Rottweiler.

When the man rushed to his dog’s defense, the nude intruder, later identified as 20-year-old Jeffrey Delice, jumped on him and began choking and biting him.  Fearing for his life, the man shot twice.  One bullet struck Delice in the leg.  Then the gun jammed.

The pair struggled, and the homeowner was finally able to pin Delice down until police arrived.  Delice tried to bite officers when they tried to handcuff him.  He was arrested and transported to Jackson Memorial Hospital’s Ryder Trauma Center to treat his gunshot wound, where he also tried to bite the staff.

Miami Police spokesman Napier Velazquez said Delice appeared to be under the influence of drugs.

“For right now it does appear to be a justified shooting,” said Moreno.  “This individual was acting irrational, fighting with the dog, and not only that, but at the point that the homeowner attempted to get this individual’s attention, he immediately jumped onto the owner and started fighting with him.”

Delice has been charged with burglary with an assault, resisting arrest with violence, lewd and lascivious behavior and animal cruelty.