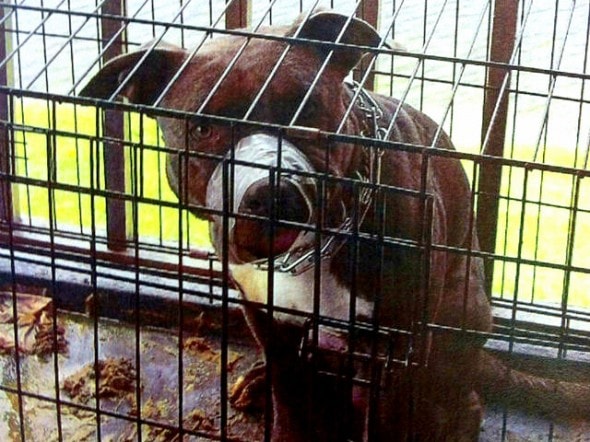 A Palm Beach County woman was arrested and charged with animal cruelty after her duct-taped, caged pit bull had to be rescued from a third floor balcony earlier this month.  It was 92 degrees that day, and because of a neighbor’s tip, the dog was saved from an agonizing death and is now doing well. 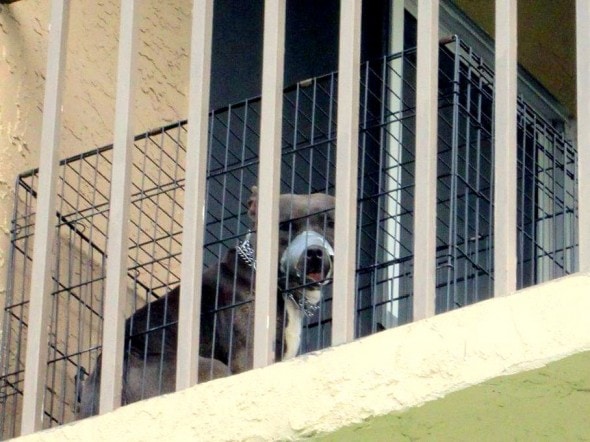 Sheriff’s deputies responded to an animal abuse call in suburban Boynton Beach and arrived at an apartment complex to find a large dog in a small cage on a third floor balcony.  The visibly distressed dog had his muzzle duct taped, with the tape encircling his head so he could not claw it off.

“He was in a crate with duct tape wrapped around his mouth, and wrapped behind his head to prevent him from clawin’ it off,” said Captain David Walesky, Palm Beach County Animal Care and Control spokesman.  “Luckily somebody saw this, because this is a horrible situation for a dog.  This person was in the right spot at the right time.” 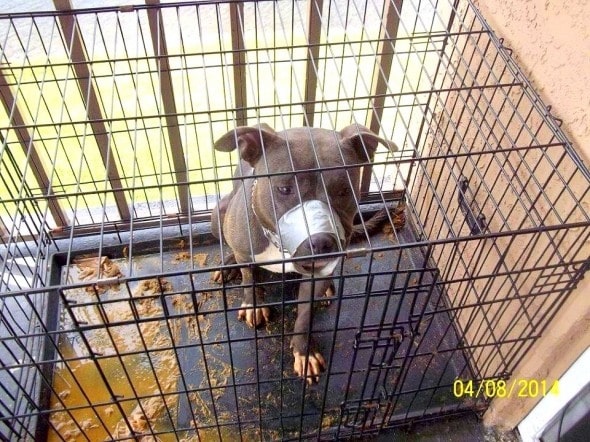 The crate was a swamp of urine and feces, and the poor dog had urine burns on his testicles and the pads of his feet.  Though they wouldn’t have been much use for the dog in his condition, there was no food or water in sight.

Deputies spoke with a man in the apartment who explained that the dog belonged to his roommate, 29-year-old Andrea Curiel.  When questioned, Curiel said she put the dog on the balcony the night before.  She said in the morning she saw the mess in the cage, but was running late for work and had to drop her children off at school.  She duct taped his mouth closed because she claimed to have been afraid he would bark and get her into trouble with apartment management.

“I just can’t believe that people could actually do that to animals,” said neighbor Robin Erwin.  “That’s like your child, you know?”

Curiel was finally arrested on Wednesday, April 23rd on charges of animal cruelty.

The dog is currently being cared for at Palm Beach County Animal Care and Control, and is up for adoption, along with many other loving animals.  If you are interested, please click here for more information.  He is being called Sausuke, and his animal ID is A1727238.