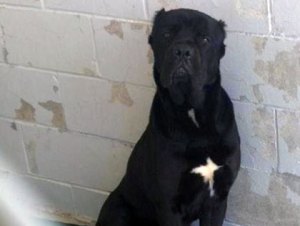 A cane corso was abandoned at an elementary school in New Jersey, which is strange and somewhat disturbing in itself.  The stranger and more disturbing part though is that the dog has had it’s ears cut off, cropped right to it’s head, and not by an sort of professional veterinarian.  Why anyone would do such a thing to the sweet dog, who has been named George, is a mystery which officials are trying to solve.

George, who is large and black with a white star on his chest was tied to the doors of a school in Port Reading and is now in the care of the Woodbridge Shelter.  “The ear cropping that had been done was not done by a vet,” Heather Campione, manager of the shelter. “We’re just a mile away from where he was tied up, the animal shelter, so that would have been a safe place to bring him,” she said. “When people don’t want their dogs anymore, they do dumb things — especially tying up a dog of that size at an elementary school where a small child could have approached him.”

George is a very friendly pooch, who likes to play tug of war and frisbee, says Matt D’Amico who also works at the shelter.  “Naturally, you’ve got to feel bad for the dog,”  he said Matt D’Amico.  “Seeing him outside now and just the past couple days, he’s been just a big goofball, he’s just a big baby.”  The list of people offering to adopt George is already getting long, with about 2 dozen people inquiring including police detective Ken Gallop.  “That would be the second boy in the house. I have three girls,” Gallop told Putney.

It appears that George may have been an outside dog as he was quite dirty when he was found so investigators are hoping that a neighbour may recognize his picture on the news and call in to let police know who his owner is.  They will likely be charged with animal cruelty and abandonment.  Anyone with information is urged to call the NJSPCA at 800-582-5979 or the Woodbridge Animal Shelter at 732-855-0600 x5007.