On Sunday, May 31, 2015, Moby, a 16-year-old Husky went missing from his house in Mount Desert, Me. His owners Bobbie Williams and Jason Watson went out looking for him and after hours of searching, found him trapped 90 feet down a drainage culvert. Luckily for the pet, the local fire department and public works personnel were more than happy to help rescue the pet. 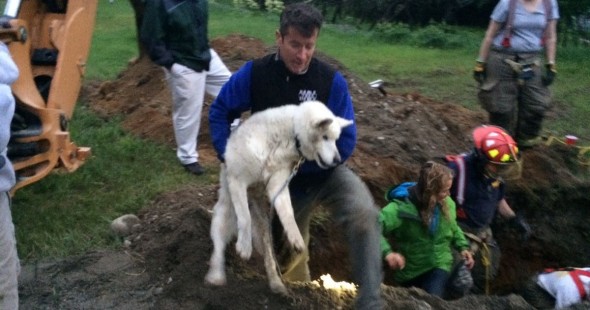 “He doesn’t get around that well anymore, so we didn’t think he had gone far, but it was weird that we couldn’t find him,” Williams told Mount Desert Islander. “He can’t really run and doesn’t chase anything, but maybe he was following a scent. I really don’t know what could have lured him in there.”

The dog was found by chance when Williams was calling out Moby’s name and heard a muffled bark coming from the culvert. The pet owner called firefighters and rescuers came right away.

At first, no one was sure how far inside the drainage the dog was. They could hear him but could not locate him. Fire Chief Mike Bender called the Bar Harbor Public Works Department and asked to borrow their sewer lines camera, but even with the camera they couldn’t see the dog.

With a backhoe and small excavator borrowed from the city, rescuers dug along the culvert to access the pipe and use the camera in a different location. This paid off and the Moby was found 90 feet into the drainage system.

It took rescuers about four hours to locate and rescue the dog, but after all their hard work, the mischievous senior pet was back with his worried owners.

“I was amazed and overwhelmed at how helpful and really nice the fire department was,” Williams said. “They all seemed to care a lot about the dog. I thought they would be annoyed, but they were just as sweet as they could be.”

Moby did not suffer any injuries, he was just tired and dirty.