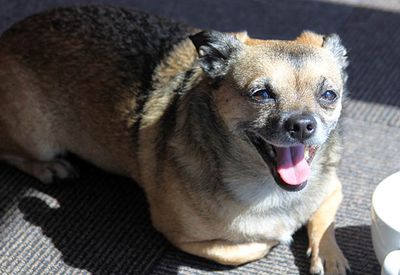 On the 1st of May, a 79-year-old woman was walking Winston, her furry best friend, in a parking lot near North 130th Street and Linden Avenue in Seattle, Washington when a man and woman ran up to her, grabbed the dog’s leash, and stole him.

According to department spokesperson Jonah Spangenthal-Lee, she “tried to hold on to the leash, but the suspects shoved her to the ground, grabbed the dog, and ran off.  The victim told officers the female suspect yelled ‘it’s my dog’ as she fled.”

Marni Betzvog, the victim’s daughter told KIRO 7 News that she was depressed about the loss of her dog, and her shoulder was dislocated in the attack.

Winston had been rescued by the woman several years ago.  He was found abandoned near the Aurora Avenue area.

Marni said last summer she ran into a woman claiming to be Winston’s original owner.  They had a civilized conversation, and the dog’s owner gave her a cell phone number, but they never heard from the woman.

KIRO 7 News tracked the alleged dog thief all the way to Facebook.  They sent this person a message, but received no response.

“With the victim’s description of the suspect, detectives in the robbery unit were able to identify the woman with the help of US Marshals,” said Spangenthal-Lee.  “After detectives found the female suspect was living in Wenatchee, they called her and convinced her to bring the dog back to Seattle police headquarters, where she met with robbery detectives Wednesday.”

Even though the woman suspected in this was not arrested, she still may face robbery charges.

After giving Winston some water and a half a sandwich, they drove him home.

“According to detectives, Winston was clearly delighted to be back home with him mom,” said Spangenthal-Lee.

5 thoughts on “Elderly Woman Reunited With her Stolen Dog”