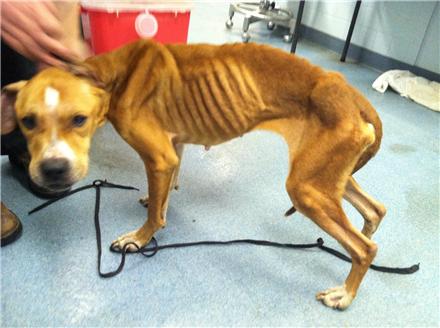 A starving dog found in Utica, New York is healing and being given the chance at a real life after being discovered with a shoelace tied around her neck.

The shoelace was not tight enough to affect her ability to eat or breathe, and it was removed as soon as she was found. She was taken in by Stevens Swan Humane Society and named Autumn.

Nicole Broccoli of the SSHS says X-rays showed her GI tract “is full of bones,” likely from eating whatever she could scavenge. It could be very dangerous having these bones inside, but Nicole says they will be monitoring her to make sure the bones pass through normally.

Autumn is a three to four-year-old boxer mix, and weighs a shocking 26 pounds, about 35 pounds less than normal. 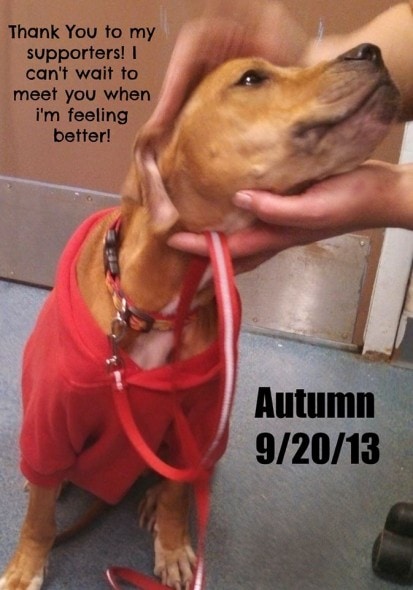 SSHS has already received calls about Autumn, and are hoping to see donations of bedding, toys or money to help provide her with a comfortable stay, as well give her the best chance of survival with the medical care she requires. She’s not quite ready for dog treats yet. Anyone interested in donating may visit here.

Northeastern Roofing and Asbestos, a group called Lainey’s Army, and individuals have offered over $1,500 as a reward for information leading to the arrest and conviction of Autumn’s abuser. Police do not currently have any leads. Anyone with information should call the SSHS at 315-738-4357 ext. 0.

This morning the SSHS said Autumn was up and alert, and happy to see people.

Utica area Assemblyman Anthony Brindisi is co-sponsoring a bill to move animal cruelty offenses from Agriculture and Markets Law to being under New York Penal Law, so animal abusers would receive harsher punishments.

“The Ag and Markets laws are very outdated,” he said. “They were written 100 years ago when pets were considered property, but now our pets are considered family members. We need tougher laws.”

He is also urging constituents to contact Governor Cuomo and state legislature and pressure them to pass the bill for a registry of convicted animal abusers, which is currently stalled in the Assembly.