Meghan Beach from Enfield, Conn., was out walking her dogs on May 18, 2015, when she came across an emaciated black pit bull. The dog had a difficult time walking and Beach new she couldn’t turn a blind eye to the pet in need. Thanks to her, the skinny dog was rescued and is now recovering.

“She was completely skin and bones,” Beach told Fox CT. “She walked very slowly, like everything hurt.” 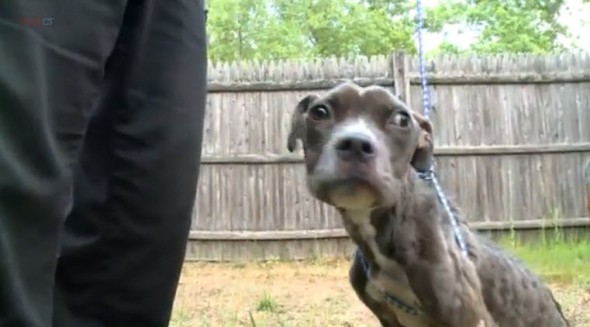 Beach approached the dog and after realizing how skinny and abused the pet was, she called police. Officers were dispatched to Bernardino Avenue to pick up the dog and transport her to an animal clinic.

Veterinarians examined the pet, found no microchip on her and said she was approximately one or two years old. A healthy dog at that age should weigh between 40-60 lbs, but the abused pet only weighed 15 lbs.

Enfield Animal Control is keeping the dog and nursing her back to health. Once she is healthy she will be made available for adoption, meanwhile there is an ongoing police investigation and rescuers hope the criminals who abused the young dog are apprehended.

“We’ve never had a dog in this bad of shape come into the pound before,” said Animal Control Officer Eric Boucher. “[This is] plain neglect, abuse animal cruelty.”

Authorities encourage anyone with information about the abuse to call animal control at 860-763-8944.

26 thoughts on “Emaciated Pit Bull Saved Thanks to Dog Walker”