In April, a six-month-old Mastiff mix puppy was found abandoned in a Harlem, N.Y., park, what shocked rescuers was the state the puppy was found in. The female pup had her tail inhumanely chopped off and she had little control of her four legs. All the puppy could do was crawl around in pain. 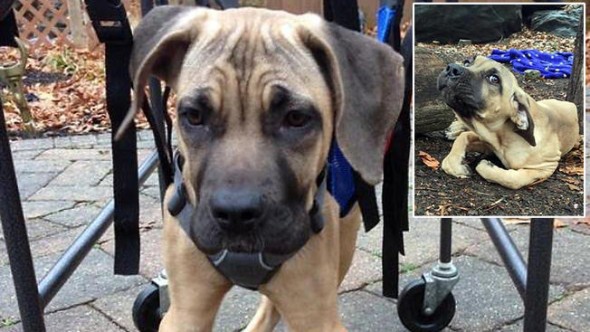 New York Bully Crew welcomed the dog into their program and named her Jesse. She was immediately seen by a vet and tests were done to determine the reason why she could use her legs. Unfortunately, veterinarians and neurologists were not able to find a cause for the paralysis.

Nevertheless, a medical rehabilitation program was set in place to help Jesse regain her mobility. She goes swimming in a therapy pool, gets acupuncture treatments and does additional physical therapy sessions each week, and this therapy is paying off.

Jesse who once couldn’t support her own body weight and just dragged herself on the ground learned to stand for a few seconds, take her first steps, walk with an assisting harness, and is now walking all on her own (see the video here).

Her rehabilitation has been nothing short of a miracle and New York Bully Crew is thankful for the community’s support and the more than $10,000 in donations that made Jesse’s progress possible.

We might never know what truly happened to Jesse and we can only guess how gruesome her abuse most have been. However, we are glad to know Jesse is moving forward, leaving that horrific past behind, and getting ready for the next chapter in her life – adoption.