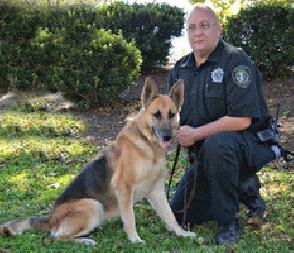 Trixie was a deputy with the Polk County Sheriff’s Department in North Carolina that suddenly passed away earlier this month from cancer leaving her partner Ronnie Russell devastated. One hundred people attended a memorial service for Trixie on Wednesday that brought Russell to tears.

Trixie, a 10-year-old German Shepherd, spent her life as a K-9. She served with several different county’s sheriff’s office and spent the last year working with Ronnie Russell and Polk County Sheriff’s office. In her 12 months of work in Polk County she helped seize about 35 thousand dollars in drugs. Trixie loved her job. She passed away suddenly from cancer on March 15th after only the previous night helping assist with three drug arrests.

Approximately 100 people and six other K-9s attended the memorial service. When Russell stood up to speak at the service he didn’t get many words out before emotions took over and he broke down in tears yet again. Polk County Sheriff Donald Hill, who lost a police dog to cancer several years ago, stepped in to speak. “I know what he’s going through,” said Hill.