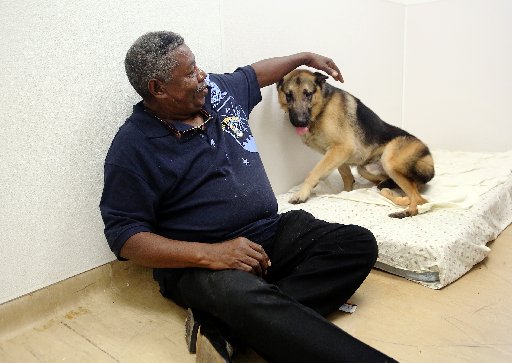 It’s been a long year for Robert Moreland, but even longer for his dog Blackjack.  The german shepherd was stolen from Moreland’s truck while he was at Home Depot 10 months ago, and Moreland was devastated.   He and Blackjack had been together since the dog was a pup, and now they have finally been reunited.

When Moreland discovered that Blackjack had been taken he called police, but they never found him.  “It hurt me to my heart,” Moreland said, a long time dog lover who did not want to give up the search despite health concerns of his own.  Moreland has suffered from PTSD ever since retiring from the Air Force in 1981 after 20 years of service, and he credits Blackjack with helping him cope.

Finally he gave in and did get another dog, named Rommel, though he continued to pray for Blackjack.  “I had given up,” Moreland said. “Not because I wanted to, but because I know evil people are in this world, and they don’t care.”  Then the miracle happened.

Eric Weinberger, a volunteer at Big Dog Ranch Rescue, got a phone call from a Palm Beach resident who had been feeding a stray dog for several months.  Weinberger came and after several failed attempts was able to catch the dog, which the microchip revealed to be Blackjack.  Weinberger fears that Blackjack was used in dog fighting.  He was found with a green plastic collar around his neck and a piece of meat hung from a chain. “We’ll never know what they were using him for,” said Weinberger, “But the only reason he would have that collar on him is if he was used as a bait dog.”

Big Dog Ranch Rescue called Moreland to deliver the news and the pair had an emotional reunion on Valentine’s Day.  Blackjack went straight to Moreland and curled up beside him, as if no time had passed.  Blackjack had surgery to treat his wounds on Friday, and should be able to go back home on Sunday.  “I was so pleased (to find him),” Moreland said, and he expressed his gratitude to the kind people at Big Dog Rescue for bringing his boy home.