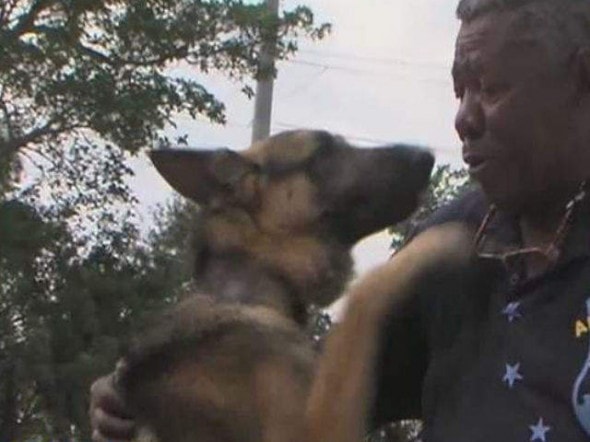 For Robert Moreland, his dog Black Jack was more than just a companion. Black Jack has helped Moreland cope with PTSD after serving two decades in the Air Force. Then last April someone took Black Jack from him. Now ten months later the two are reunited.

Black Jack, a two-year-old German Shepherd, had been by Moreland’s side during some of the darkest days of his life. “PTSD is one mother,” said Moreland. “It wipes you out. Every time something goes wrong it bests you to death.” Then something went terribly wrong last April when someone stole Black Jack. “It hurt me to my heart,” said Moreland.

Then ten months later Black Jack was found by a resident in a nearby retirement community. They contacted Big Dog Ranch Rescue. Volunteers said that Black Jack had been found with a green plastic collar and a chain with rotten meat around his neck. Both are indications that he had been used as a bait dog for a dog fighting ring.

Black Jack luckily had a microchip and he was able to be reunited with Moreland on Thursday. Black Jack will require surgery for some of the injuries he suffered during his ten month ordeal. Big Dog Ranch Rescue plans to raise the funds to get Black Jack the care he needs. Donations can be made at their website.