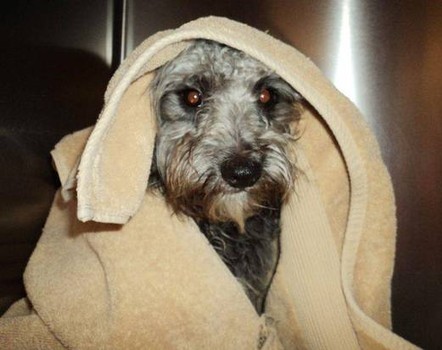 Last week, the quick actions of a train engineer saved the life of a puppy that had been tied to the train tracks.

On April 2nd the Union Pacific Railroad engineer spotted a man walking away from the tracks in Mecca, California. He also noticed that an object left behind on the tracks. That object turned out to be a 10-month-old poodle-terrier mix. The engineer quickly applied the emergency brakes and stopped the train before the puppy was run over.

Union Pacific Special Agent Sal Pina reported to the scene and arrested the man and rescued the dog from the tracks. “It’s probably one of the worst things I’ve seen,” said Agent Pina, whose own dog Sadie is the same breed as the one tied to the tracks. “I’ve never seen something like this.

The man arrested was 78-years-old and was taken to a field office for questioning. Agent Pina determined he could not pursue animal-cruelty charges because the man was confused or senile and didn’t fully understand what he had done. He was released to his family.

The puppy was taken by Animal Services to the Coachella Valley Animal Campus where he was examined, treated and bathed. Veterinary Technician Jo Marie Upegui also took Banjo home to give him extra care. The dog has been nicknamed Banjo and is available for adoption. A special application process will take place for Banjo. Those interested can e-mail [email protected]