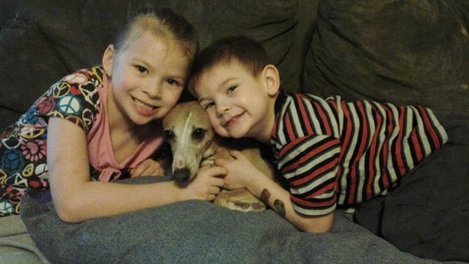 Last July Dauz, an Italian greyhound, was stolen from his family’s front yard. Now almost a year later he is reunited with his family after being found over 900 miles away.

When Dauz, which is short for the family’s name “Dausman”, went missing from his home in Collinsville, Illinois last July his family immediately started looking for him. They contacted police and frantically searched everywhere and every way they could. They posted on Facebook, put up ads on Craigslist, handed out flyers, and contacted shelters and rescue groups.

Nine months later Alicia Dausman was beginning to give up hope when she received a call from an animal shelter in Fairfax, Virginia that had some amazing news for her. They had found Dauz. “I was shaking. I was crying. I’ve never been so happy. It was like a dream getting that call,” Dausman said. “I can’t believe they found Dauz.”

The reunion was possible all thanks to a microchip. “They ran Dauz’s microchip and saw that he was reported missing,” said Dausman. “They called me immediately, before the people who took him could go try to claim him. We’re just so ecstatic. He’s my 6-year-old daughter’s best friend.” The Dausman family immediately planned a trip to go get their lost dog.

Apparently Dauz had been given to a man who lived in Virginia. He gave the dog to his wife as a birthday gift. The couple had been taking care of the dog when Dauz escaped and ended up at the shelter. “He escaped and found his way back to us,” said Dausman.