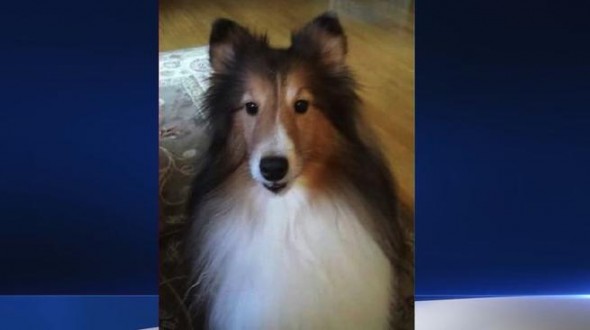 In Culver City, California, a family was fearing for the health of their furry loved one after their home was burglarized, and Savvy their Shetland sheepdog was taken.  Thankfully, things can begin to get back to something a little more close to “normal” for Melissa Henning.  Savvy is home, safe.

This past Saturday, Melissa and Savvy were reunited thanks to someone watching a television news report.  The individual realized that the dog in the photo on the television was a dog they had seen earlier that day.

The person called authorities.  Savvy had been micro-chipped, and thanks to the data contained on it, Savvy was determined to really be the dog from the news story.  Savvy was returned to Melissa, and she’s just thankful that everything is okay.  Savvy is epileptic, and is prone to seizures.

When Melissa came home this past Friday to find that she had been robbed, her first concern was finding where Savvy had gone.  Savvy needs to have medication administered for her condition twice a day.  Without it, Savvy can suffer from crippling seizures.

She had offered up a reward, and local television news had covered the story, hoping to help find the missing dog.  In the report, it was made known that Savvy had been micro-chipped, and the information on it was up to date.  Anyone with information leading to the recovery of Savvy was to be reported to the Culver City police.

Savvy and Melissa can begin to move on now.  Melissa is very thankful to have him back, healthy and safe.

Remember everyone, keeping your pet’s micro-chipped, and making sure that the information contained on it is up to date is key if one of them should ever go missing.  Without that information, reuniting you with your pet can be difficult, if not impossible.  Most vets can do the procedure very cheaply, if not at times for free.  Check with your vet today.

20 thoughts on “Epileptic Shetland Sheepdog Returned To Her Owner”