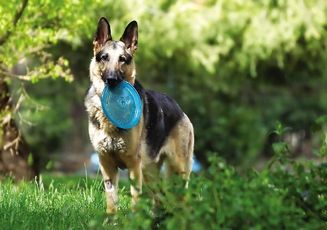 A dog in Medford Oregon baffled local police when he repeatedly freed himself from the confines of his kennel at the Best Friends Animal Hospital, spending an evening touring the facility and tripping burglar alarms.

Marsha Billeci brought her dog Jack to the vet last week when he became lethargic and refused to eat. He was suffering from a flu-like illness, and Billeci believed that he was on death’s door. “We got him as a puppy,” Billeci said. “He is like one of our 4-legged children.”

On Thursday morning, she was shocked to receive a call from the vet explaining that he had gone missing. “I went hysterical when I got the call,” she said. “My concern was that he would lay down in a ditch and die.”

Police had visited the vet a number of times the same evening after motion detector alarms had been tripped at 10:30 p.m., 1:30 a.m. and 4:45 a.m., according to Billeci. The vet and his staff  returned to work the next day and were confounded when they discovered that Jack’s kennel was empty. A quick search of the facilities confirmed their worst fears: Jack had ripped open four bags of food and done some snacking before making his way to the  clinic’s back door, where he unlocked the deadbolt, pulled the lever handle, and sauntered away, enjoying his newfound freedom.

“You can see the claw marks,” she said. “He worked that door.” According to Billeci, Jack’s height and intelligence make for a very capable combination. She said he routinely opens doors and drawers in their home. “He knows where his treats are,” Billeci said. “He self-serves. He hooks his claw on the handle and pulls. He yanks super hard.”

The vet office closed so employees could join a search party, and in the meantime Jack was wrapping up his adventure seven miles away, on the other side of town. After leaving the vet’s office he headed in the general direction of his home before arriving a stranger’s house, where he attempted to let himself in. “He tried to get in this woman’s house,” Billeci said.

The frightened woman contacted animal control, and in a matter of hours, the adventurous invalid was back on his living room sofa. He’s said to be resting at home while finishing a course of medication, and his guardian is elated to have him back. “Everybody was wonderful,” Billeci said. “He’s quite a handful. But we enjoy him.”

Jack’s misadventure made an impression on his veterinarian, prompting a positive change in policy: “We now have individual locks on each cage,” he said, adding the new measures should thwart the escape efforts of any critter without benefit of an opposable thumb.