You know the best now meet the worst. Breaking Glass Pictures’ latest documentary  brings out the dog lover in us all as we follow the stars of the film, and their owners, as they compete for the coveted title of “Worst in Show.” 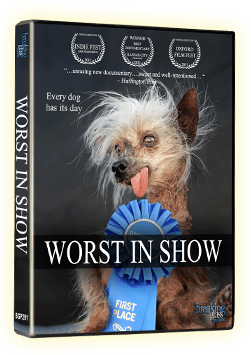 Every summer, proud dog owners bring their canine companions to Petaluma, California, to compete for a highly coveted title.  No, this isn’t your standard “Best in Show” championship, this is the contest for the “World’s Ugliest Dog.”  For more than 20 years, the grassroots contest has gained worldwide media attention and has given rise to a new class of competitors.  2008 was a particularly competitive year: vying for the top spot was Rascal (the veteran), Icky (the Rookie), and Pabst (the underdog).

“Worst in Show” is a fascinating documentary that examines the many ways our society defines beauty and takes viewers behind the scenes at an event where the competitors never fail to impress.  Equally impressive, however, is the care and devotion of their human counterparts, all of whom prove that love goes further than skin deep.

For more information on “Worst in Show” including interviews and DVD copies, please contact [email protected] Life With Dogs readers interested in buying a copy of the DVD will receive a discount – just mention that you saw it here.