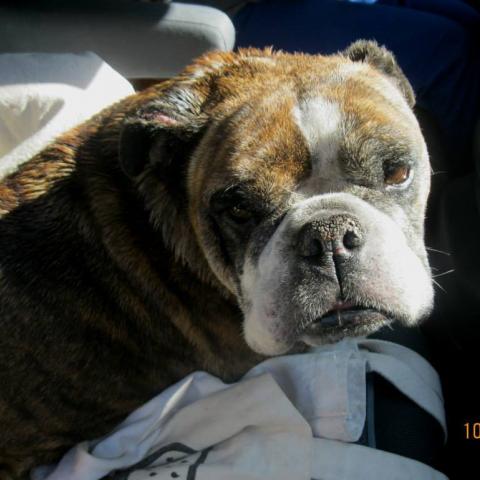 Evie was dumped at the shelter by her owners, paralyzed in her hind legs and with no control of her bladder and bowels. Her rescuers at Leave No Paws Behind, of Sun Valley, CA, received an 11th hour call to take her from death row before her time was up. They say she literally had one hour left when they rescued her.

Evie’s rescuers have provided her with a wheeled cart to give her mobility and enhance her quality of life. She quickly learned how to get around and appears to be a very happy girl.

Leave No Paws Behind has posted a series of videos with Evie at YouTube, that show her getting used to her new wheels and the new people in her life.

.
Here is a selection:

.
Evie learns to fly! Evie, tossed aside by the only humans she ever loved and left to die on a cold, shelter floor, was not only given the gift of life and the promise of many tomorrows but the most wonderful gift and surprise of all, the use of her legs!!!!

.
.
Evie has a party!!! Sweet Evie got a visit today [November 2] from the entire Wisneski family!!! {her rescuers’ family)