More than 270 dogs were removed from a home in Howell, N.J. today, in a case authorities are calling an “extreme hoarding situation.”

In a statement reported by the Asbury Park Press, Ross Licitra, chief law enforcement officer for the Monmouth County Society for the Prevention of Cruelty to Animals, said “most of these dogs have never seen the outside of their house before.” The house, which totals 1,880 square feet, was crammed full, its conditions deplorable. Officials reported many of the dogs were located on book shelves and makeshift platforms; some were even inside the walls.

The situation was discovered Thursday evening when an animal control officer was called to the location to catch a loose dog, Licitra said. The Associated Humane Society officer, who sensed something amiss, eventually made contact with the owners of the house and then contacted the SPCA.

“This is actually the worst hoarding case that we’ve ever experienced ever here in the history of Monmouth County,” Lixitra said.

Most of the dogs were in “fair” condition, though some received emergency medical care. A triage center was set up on site to care for the animals and see to their proper vaccination prior to their transport to shelters. About 80 received vaccines at the scene before supplies ran out.

Licitra said the residents of the home, Charlene and Joseph Hendricks, were cooperating with authorities. The situation is believed to have started three years ago with just eight dogs, which reproduced from there.

“They’re just not stopping it,” he said. “I think it’s just completely uncontrolled.”

Acting Monmouth County Prosecutor Chris Gramiccioni told reporters that criminal charges would hinge on the condition of the dogs. The situation may only warrant a municipal court disorderly persons charge or possibly no charges at all.

It was a steady stream of canines as workers in hazmat gear aided authorities, some wearing apparatus to help them breathe under hazardous conditions. The house, reports said, was covered in and redolent of animal waste. 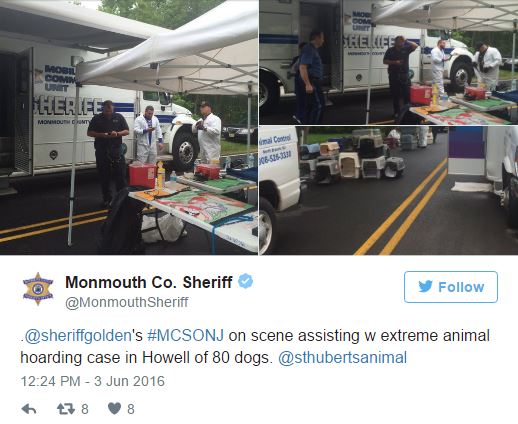 Sheriff Shaun Golden reported that firefighters were using thermal imaging equipment to search for animals in cracks or crevices in the home.

“It’s a huge undertaking,” Licitra said of the effort to remove the animals. “Everybody is trying to get this under control.”

It was reported that pregnant dogs were giving birth on scene even as the rescue was under way. Per a report from ABC7, most of the rescued dogs should be ready for adoption within a month or less from the Monmouth County SPCA.