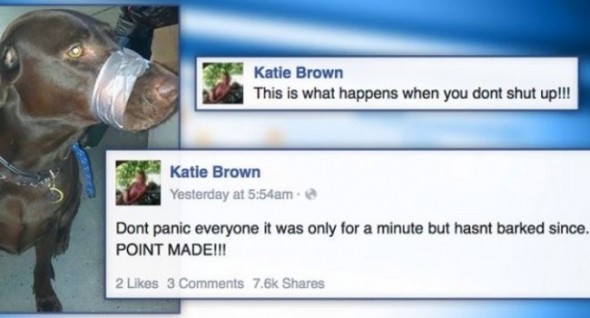 It’s a case that began with a social media post.

Katharine F. Lemansky, 45, was charged with animal cruelty after a photo of her dog with its moth duct-taped shut went viral, igniting the ire of animal lovers everywhere. She was found guilt on Friday, North Carolina ABC affiliate WTDV reported.

The photo, which was posted to Lemansky’s Facebook account under the alias “Katie Brown, depicted her chocolate Lab, Brown, his muzzle wrapped in silvery duct tape. The caption read, “This is what happens when you don’t shut up!!!”

In court, Cary Animal Control Supervisor Shelly Smith said that Lemansky called the incident “a joke,” and that the photo was meant to be shared with her son — not publicly on Facebook.

The post sparked a three-state investigation that eventually led to Lemansky as the suspect.

Although prosecutors argued that the taping caused the dog paid, Smith said she permitted Lemansky to keep the dog, as he seemed in good condition with no signs of swelling.

The judge sentenced Lemansky to a year of supervised probation, which was suspended. She also must pay court fees.