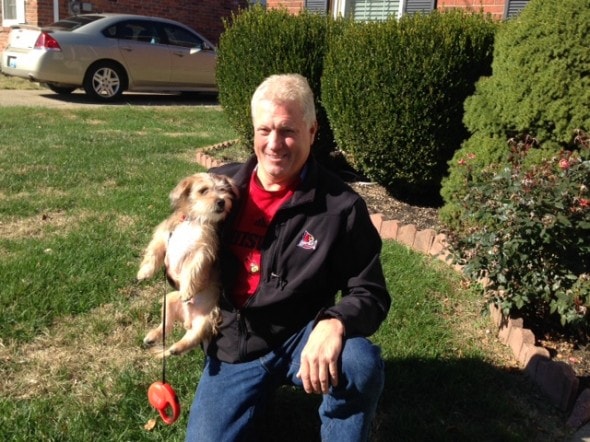 A tiny terrier was returned to his heartbroken owner after having been missing for two years, thanks to concerned dog lovers who kept hope alive by sharing Benji’s photo until he was found and returned.

Willett says that his rescue dog is an escape artist, and after he took off, needed to be rescued again. Almost exactly two years ago, Willett took Benji outside to water the grass. He always would do his business and come right back, but this time, Benji vanished.

“[I] looked for about a month and finally just sort of gave up, didn’t think he’d ever come back.”

But the Okolona, Kentucky man didn’t truly give up hope; he continued to search Facebook for the familiar furry face. His perseverance paid off one day when he stumbled across a photo that he believed was of his boy.

Benji was in West Point, about 16 miles away from home, which would have taken a person over 5 hours to walk taking a direct route. How the little dog traveled so far is a mystery.

“It’s unbelievable, somebody might have picked him up and dropped him off, you never know. Somebody has taken a little care of him because he’s pretty healthy.”

Benji was waiting for his dad in a cage at City Hall. Once Willett provided animal control with proof of ownership, he was finally able to be reunited with his dog.

“At first, he was a little nervous. He had been out in the rain for two or three days. He was shaking and he was cold. He was miserable with the fleas on him.”

But now that Benji has been cleaned up and is adjusting to life back at home, he has become less adventurous, and chooses to stay right with his companion.

“He just follows me around everywhere I go,” Willett said.

Today Benji was due to be microchipped and given a new ID tag.