Dr. Karen Becker presents an alternative look at the notion of alpha dogs, and being the leader in your pack. 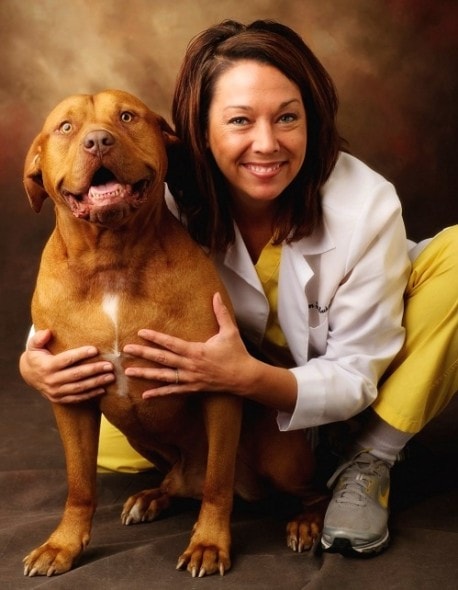 Most behavior problems in dogs involve either normal canine behaviors owners don’t like or understand or undesirable behaviors rooted in anxiety.

In order to improve any type of dog behavior issue, the steps must always include:

Unfortunately dog trainers, veterinarians and other canine experts have been conditioned over the years to believe “bad” behavior is driven by a dog’s desire to be dominant over his humans.

So owners receive the message that exerting control over their dog — showing him who’s “boss” — is the key to improving behavior.

This is an anthropocentric focus on the relationship between people and dogs that considers only the needs of the human.

The Merriam-Webster definition of anthropocentric:

1. considering human beings as the most significant entity of the universe
2. interpreting or regarding the world in terms of human values and experiences

According to Dr. Karen Overall of the University of Pennsylvania, an Applied Animal Behaviorist, writing for dvm360 :

The entire concept of dominance as applied to pet dogs is almost always based on a profound misunderstanding of the shared history of dogs and humans.

And for the past 2,000 years there have been specific breeds of dogs of varying shapes and sizes that engaged in specific tasks helpful to humans.

In fact, many of the physical differences among dog breeds developed as a deliberate effort by humans to match desired behaviors to physical attributes. Dr. Overall uses the example of field trial or working English springer spaniels and show dogs of the same breed. These animals look like completely different breeds because they’ve been bred for different behaviors and “jobs.”

Normal Dog Behavior Doesn’t Include a Drive for Dominance

In a social hierarchy where there are higher and lower status individuals, dominance rarely leads to aggression or fighting — just the opposite.

Early studies seem to have misinterpreted the concept of dominance in canine social hierarchies.

The dogs in early experiments formed rank hierarchies based not on their own natural social tendencies, but on how the studies were designed. Further, researchers assigned dominant traits to certain dogs based on their behavior with a bone as puppies.

The way puppies interact in a natural setting is actually much more fluid than study results indicate, and it changes over time as they mature.

Unfortunately, these early “forced hierarchy” studies led to the erroneous assumption that in healthy human-dog relationships, canines subordinate themselves to their owners. This led to the theory that owners must exercise dominance over their pets in order to elicit acceptable behavior.

Dogs who do display dominant tendencies have in the past been diagnosed with “dominance aggression.” But given our improved understanding of canine nature, that behavior problem is now more often referred to as “impulse control aggression” or “conflict aggression.” This rightfully distances us from the concept of dogs as naturally striving for dominance over other animals and people.

Dogs with behavior problems involving aggression have an anxiety disorder. They are, in Dr. Overall’s view, troubled, needy and pathological. One of the worst methods for handling such a dog is to attempt to dominate him — especially when it involves hitting, hanging, “dominance downs,” “alpha rolls” and other similar techniques intended to show the dog who’s boss.

Dogs with anxiety disorders have trouble processing information and making accurate risk assessments. The actions dog owners take to demonstrate dominance over a misbehaving pet actually result in an already troubled animal feeling betrayed, terrified, threatened and backed into a corner by his human.

As you can imagine, this only results in a worsening of the dog’s condition.

Dr. Karen Becker is a proactive and integrative wellness veterinarian. You can visit her site at: MercolaHealthyPets.com.

Her goal is to help you create wellness in order to prevent illness in the lives of your pets. This proactive approach seeks to save you and your pet from unnecessary stress and suffering by identifying and removing health obstacles even before disease occurs. Unfortunately, most veterinarians in the United States are trained to be reactive. They wait for symptoms to occur, and often treat those symptoms without addressing the root cause.

7 thoughts on “The Myth of the Alpha Dog”