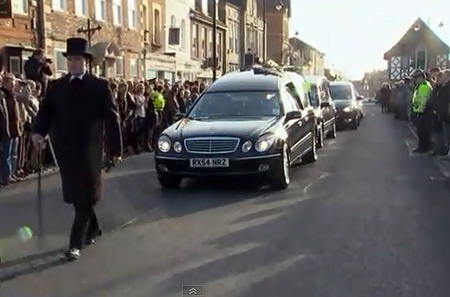 Bound by fate, Lance Corporal Liam Tasker and his faithful dog Theo have made their final journey home.

Technically, a seizure is responsible for the death of Theo. Consider, however, that he passed away just hours after witnessing the shooting death of his handler and best friend, and you’ll understand why many are openly speculating that he died of a broken heart.

Lance Corporal Liam Tasker, 26,  was killed by small arms fire while he and Theo were on patrol in Helmand province last Tuesday. Just hours after his death, L/Cpl Tasker’s body was flown back to Camp Bastion with Theo at his side. Shortly after arrival a fatal seizure took Theo, and members of the press, animal experts and even some military personnel have openly speculated about broken heart syndrome.

On Thursday, Liam and Theo were flown back to Britain in an extremely emotional repatriation ceremony that celebrated the lives of two fallen heroes.