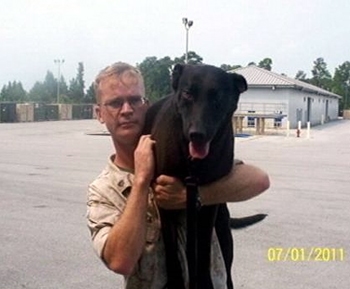 The 29-year old Marine and two fellow soldiers were killed on July 31st in a fire that swept through their living quarters in western Afghanistan.

A member of Wrinkle’s unit struggled to find words to describe the bond shared by Sgt. Wrinkle and his beloved canine partner, Tosca. They were inseparable.

A fellow Sergeant said that when the fire broke out in their Herat province barracks, Wrinkle called out for him. When he answered and Wrinkle knew he was safe, his colleague watched as Wrinkle turned back, disappearing into the fire in a search for his partner. It was the last time he was seen alive – both he and Tosca perished in the blaze.

The pews at Christ Lutheran Church in Dallastown were full Tuesday, with many of Wrinkle’s brothers from the Corps in attendance. To the right of Wrinkle’s casket sat a smaller vessel – containing the remains of Tosca.

Wrinkle will be buried today with full military honors, and his family asks that contributions be made (in lieu of flowers) to the Sgt. Christopher M. Wrinkle and Tosca Memorial Fund care of Metro Bank. The funds will benefit the Courtyard of Honor at Dallastown High School and the U.S. War Dog Association.

Wrinkle’s colleague says he knew exactly what Wrinkle was doing when he ran back into that burning building – he was trying to save Tosca. “He took a chance on his own life to get her. Chris died a hero.”

43 thoughts on “Fallen Marine Lost Life Attempting to Save Dog”