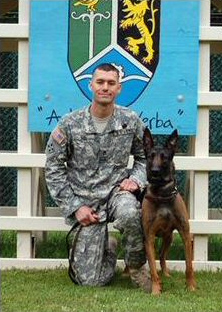 Army Staff Sergeant and dog handler James Ide the Fifth, 32, was killed in action in Afghanistan in August.

At the time of his death, his dog, Daphne was at his side, and his family requested permission to adopt her shortly thereafter. Their wish became reality last week in an emotional ceremony that saw the Belgian Malinois offered to the family in honor of their son’s sacrifice.