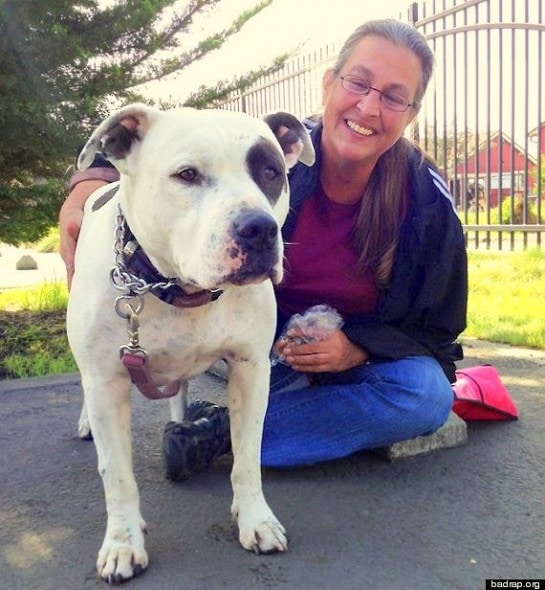 When the Devia family of Walnut Creek, California lost their apartment last year, they were forced to choose between giving up their pit bull Rocco and living in their car.  They chose the latter.  But finally, one kindly landlord heard about their situation and has offered them a new home.

Carol and Peter Devia both lost their jobs last year, and after their savings diminished, they were forced to leave their home.  Their teenage sons Christoffer and Leandro were able to stay with friends, but the couple and their two dogs – Rocco, a pit bull, and Camilla, a Lab mix – have been forced to live out of their car.

“I can’t find a place unless I give up my dog, and everyone tells me to, but I can’t do that,” Carol said. “We’ve had Camilla her whole life and Rocco her whole life.”

Both dog are house-trained and well-behaved, but an incident with Rocco put him on the blacklist.  A Dachshund once peeked his nose into their yard, Rocco rushed over and accidentally broke the dog’s tiny snout.  The family had to go to court, take a class, and then pay $200 per year for special insurance and $500 for a special three-year dog license.

Rocco has been on his best behavior since, especially once he began his classes at BAD RAP, a Bay area bully breed advocacy group.

“We’ve noticed a huge difference in his behavior,” Carol attested. “He’s like a totally different dog. He wants to meet everybody and lick everybody.”

Carol and the family spend their time driving back and forth to wooded areas where they can exercise the dogs, and parking lots where they can access Wi-Fi and cook by having a Crock-Pot plugged into the cigarette lighter.  They have found new jobs delivering newspapers at night, and sleep in the car during the day.  But they’ve had no luck finding a home.

“When landlords see Camilla, they have no problem with her. Everybody will take her,” Carol explained. “But as soon as they see Rocco, they say ‘Oh no.’”

That’s why BAD RAP has been trying to help the Devias.

It’s not uncommon for people to say ‘I can’t take the dog to the shelter where it will be killed,’” said director Donna Reynolds.  “What we’re finding is our inbox is filled with people who say ‘I’m about to go homeless, can you take my dog?’”

“It was hard in the beginning but then you kind of consign yourself to it and say okay,” Carol said. “I’m alive, I’m working. I hit bottom, so now I’ve been there and now the only place I can go is up.”

And she was right.  Soon after her story went viral, a landlord saw a post on a pit bull Facebook page and decided to offer the Devias a new home.  They were due to spend their first night there on Monday.

“He’s turning 20 tomorrow and so we’re making a birthday dinner for him,” she said, ecstatic to be cooking a real meal after months of eating “noodles and soups and 7-Eleven sandwiches… We’re making meatloaf, mashed potatoes and gravy.”

The family no longer has any furniture, and they are trying to find inexpensive beds.  As if their luck couldn’t have been any worse, their car died and they now need to find something else to get around in so they can continue delivering papers.

BAD RAP is collecting donations for the Devias through the email [email protected].

For now, the family is just grateful to have some place to call home again.

“Pit bull owners are good,” Carol said. “The community is there.  And it’s an actual community because they all help each other. Thanks to the pit bull community who came together, we have a place.”