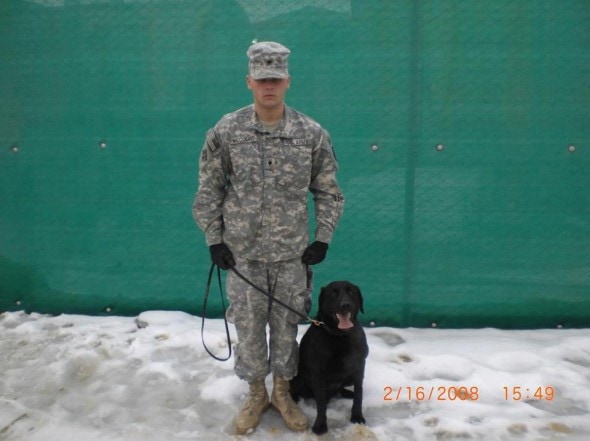 Mina served nine tours of duty in Afghanistan, was promoted to sergeant and retired with an honorable discharge from his service to the army. When the retired military hero passed away from a serious lung ailment June Etlinger wanted him to be buried at Great Lakes National Cemetery, a resting place for the nation’s military. When she asked the cemetery administration about a burial for Mina she was told a canine burial was not allowed. Now Etlinger is determined to get Mina the proper soldier’s burial he deserves.

Etlinger’s son Sergeant Corey McCourt served three tours with Mina, a black lab. Mina would find bombs and McCourt would disarm them. When Mina received his honorable discharge McCourt wanted the best for him. “He just wanted him to have a good life the last couple of years of his life, and he let him do whatever he wanted to do because he earned it,” Etlinger says.

McCourt is currently serving, so when Mina became ill and had to be put down Etlinger took on the duty of arranging his final resting place. Great Lakes National Cemetery in Holly, Michigan seemed like the logical choice for Etlinger. “My father is buried there and my grandmother and my grandfather are buried there. It’s a beautiful cemetery and it’s an honorable cemetery, and I just feel that Mina deserves that as well,” she said.

When she inquired with the Great Lakes cemetery administration she was told a canine burial wasn’t possible. “I don’t think he’s ever been asked that question before, so he was kind of like no, we don’t do that here,” she said. Etlinger and her family aren’t giving up though, they believe Mina should be treated just like the soldier that he was. Her next step is to call Washington. “I have a phone number in Washington. That was going to be my next step was to call Washington,” she said. “He may be a dog, but he’s a soldier and he deserves it.”