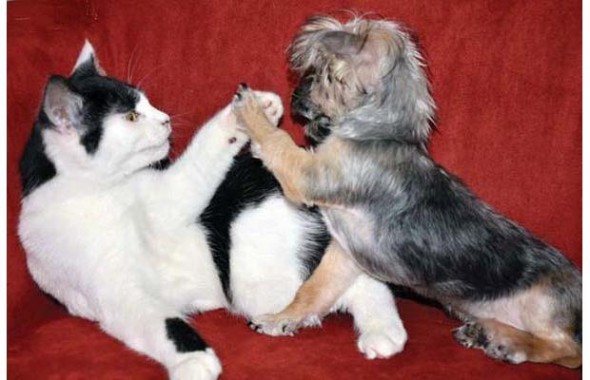 Beans and Binx share a special bond. They both have sad stories that led them to the Burnaby SPCA where they first met. Now the two are so bonded that the Burnaby branch of the British Columbia SPCA is putting them up for adoption as a pair.

In October Binx arrived at the Burnaby SPCA. The black-and-white was brought to a veterinarian in Surrey by an anonymous man who had witnessed children dropping the kitten and stepping on him. Binx was only weeks old and his eyes were barely open. Binx had suffered trauma and eye injuries that left him visually impaired.

Then in November a Yorkshire terrier mix named Beans was found abandoned in a park. He was lost, cold and clearly malnourished. “They found this poor little puppy, who was only at that time probably around six weeks old,” said Burnaby SPCA branch manager Ryan Voutilainen. “He was hypothermic…for the first two weeks, it was touch and go. He wasn’t eating. He had to be force fed.”

Both Binx and Beans have recovered from their ordeals, though Binx will have permanent problems with his vision, and will soon be ready for adoption. The same staff member at the SPCA took both Beans and Binx in to foster, and the two quickly bonded. “They play together, they’re always around each other, they sleep together,” said Voutilainen.

The Burnaby SPCA expects the pair to go fast once they are up for adoption. “A lot of people’s hearts are going to be broken when they go up for adoption,” said Voutilainen. More information on the pair can be found at www.spca.bc.ca/branches/burnaby.