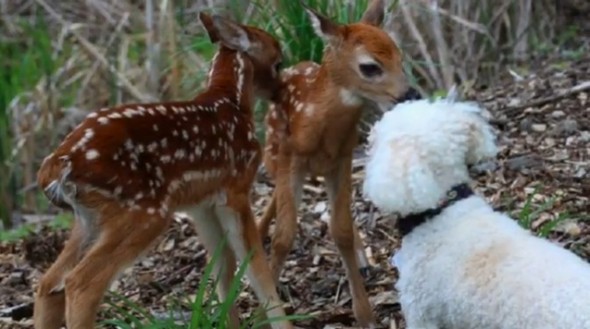 Dogs make friends with all sorts of animals, and in 2013, there’s always someone around to catch the unconventional combination on video. Last week we brought you the story and video of Milo the Dachshund and his lion pal, Bonedigger, and now we have a new alliance – that of a dog and a fawn.

Deb Olsen was outside doing some gardening when she saw a pair of fawns on her Minnetonka, Minnesota property. It was quite a surprise – she had never seen them so close. Even more interested was her dog, Gracie.

“They kept playing with each other and chasing each other around the lawn,” Deb said. “It’s crazy.” 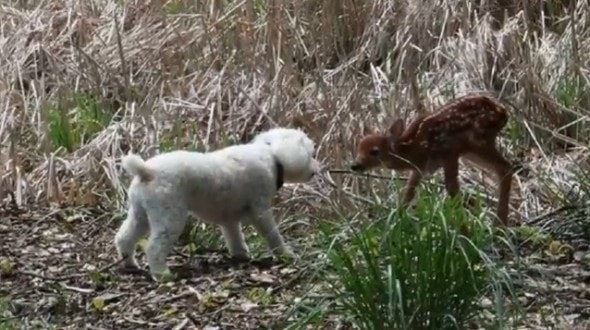 The next morning they were gone, but by afternoon, one of them had returned. Gracie and the fawn renewed their fascination with each other, sniffing and frolicking about.

Amused, but concerned for the baby deer, Deb contacted the Minnesota Department of Natural Resources. She was advised to leave it alone and not feed it, and reminded that it is illegal to keep wildlife as pets. (Though if its mother had died, would it not be inhumane to let the fawn die of hunger?)

“We are leaving it be now,” Deb commented. “This has been exciting, but we really hope the mother comes and takes the fawn away.”