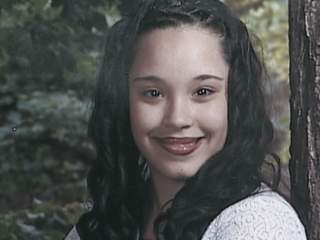 After spending a decade locked in Ariel Castro’s Cleveland house of horrors, Gina DeJesus, Amanda Berry and Michelle Knight were released thanks to the kindness and courage of neighbor Charles Ramsey. Now one of the victims is adopting one of the dogs that kept her company during her ordeal.

Gina DeJesus was only 14 years old when she was kidnapped while walking home from school in 2004. She and the others were sometimes allowed to play with Castro’s three dogs, but they were often taken away as punishment.

After Gina and the other women were rescued and Castro arrested, police seized the dogs. The ladies were returned to their families, and the dogs were taken in by Cleveland’s Animal Control. After the dogs were examined, microchipped and spayed/neutered, they were going to be up for adoption, and the women were given the first opportunity to take them home.

Gina chose Lala, a Shih-Tzu or poodle/terrier mix. With all the trauma this young woman has undoubtedly suffered, having a dog, particularly one that was there with her, could be highly therapeutic.

The other two dogs, Chihuahuas, who have been cared for by rescue group Dogs Unlimited, will be adopted out to loving homes.