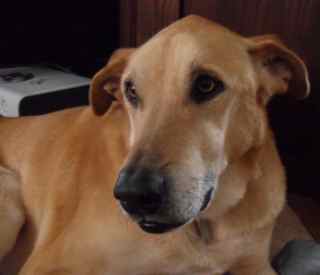 Muzzy, an 18-month-old coon hound, has taught his family and his community about loyalty and friendship. Muzzy and Cowboy, a nine-year-old yellow lab, went missing from the Uttley family’s home two weeks ago. Cowboy was tragically killed by a train and Muzzy stayed at Cowboy’s side for over a week until the two were found by police.

It was two weeks ago that the two best friends went missing from the Uttley family’s yard. “We let the dogs out before bed; they saw a deer and they chased the deer through the yard and we didn’t see them after that,” said the Uttley’s oldest son Ben. The family searched for Muzzy and Cowboy, but were unable to track down the pair. “It was sad losing two of your best friends,” said Ben Uttley.

Then the Uttley’s received a phone call from the police that their dogs had been found by the train tracks about two miles from the Uttley’s home. Sadly only Muzzy was still alive. One week after disappearing from the Uttley’s yard Cowboy was hit and killed by a train. For a week Muzzy had stayed with Cowboy not letting anyone close to his best friend. He only ever left to get some food and water, but always returned to his friend’s side. “People say he never went more than 100 yards,” said Dan Uttley.

When the Uttley’s received the phone call they got to the train tracks as fast as they could. “I was very proud of Muzzy for sticking with (Cowboy) and protecting him like he did,” said Ruth Uttley. Muzzy is the Uttley family’s hero and has taught them a lot. “Friendship, loyalty, stick by your friends. It’s just pretty humbling and amazing,” said Dan Uttley. His oldest son Ben agrees, “A lot of humans can learn a lesson from this, about sticking with your friends even when the situations aren’t the best.”