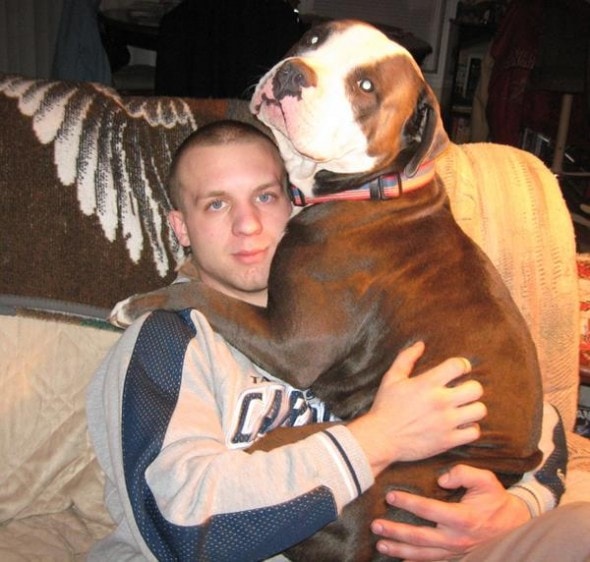 When Deborah Bryant let Junior, the furry member of the family, out back to use the facilities on the 20th of February, he decided that now would be a good time to hop the fence.  It’s not like he hadn’t done that before.  Usually, he just makes his way around to the front door, and Deborah just lets him in that way.

“I was just standing there, and he jumped the fence,’ said Bryant.

This time however, things for Junior, the 15-month-old blue pit bull, would not be as usual.  When Bryant opened the front door and Junior wasn’t there, she grabbed some shoes and a leash and headed outside to look for him.

A neighbor of Bryant’s was also outside, and when the neighbor saw her, she motioned for her to go towards the direction of North Carolina’s RT86 South.  Bryant described what she then saw, which was like a bad dream.

“I saw a man in a teal-green SUV drive across the grass median very quickly,” Bryant said.

The man then pulled into a nearby church parking lot where Junior was nosing around, snatched him up, threw him into the vehicle and took off.

Bryant scrambled home, jumped into her car and tried to give chase, but she never caught up to nor found the man or the teal-green SUV.

Bryant describes the driver as a man in his mid to late twenties, with ash-brown hair that was shaggy in the back.

The way the man grabbed Junior was kind of amazing as well.  He didn’t look big, but Bryant describes him as “muscular”, and he weighed around 75 pounds.

“He was friendly, happy.  You would always see him smiling.  He had a grin on his face all the time.  You couldn’t ask for a better dog,” said Bryant.

The theft of Junior is perhaps hitting 25-year-old Kevin Bryant hardest.  Because of what’s happened, he is completely heartbroken, and he’s planning on leaving the state of North Carolina all together.

“It’s too hard for him to stay here,” Bryant said.  “It’s created so much anxiety and depression that I haven’t been able to do anything but concentrate on trying to find Junior.”

Kevin had a very special bond with his best friend Junior.

“The dog just loved him to death,” said Bryant.  “When my son would walk into the house, even though Junior weighed 75 pounds, the dog would run to him and jump into his arms.”

There has been an innumerable amount of time spent on posting flyers in Orange and the surrounding counties.  Deborah still visits shelters regularly to see if her beloved Junior has shown up.

This and the theft of two other dogs have been reported to the Orange County Police.  The other thefts include a Yorkshire terrier on the 27th of August, and most recently, in April of this year a puppy was taken from a Durham police officer’s home.

The theft in August resulted in the eventual return of the dog, and the arrest of Troy Arrington.  Arrington is awaiting trial.

There has been an arrest in the case of the puppy being taken, but the dog has yet to be found and returned.  Christopher Reina is being charged in this incident.

No one has come up with a reason Junior was abducted, but Bryant believes the thief had seen Junior before in the backyard and had planned to grab him and eventually sell him later on.  Bryant, however, is not out for blood.

“All we want is for them to do the right thing and bring Junior back to us, with no questions asked.  Our house is just not the same anymore,” said Bryant.