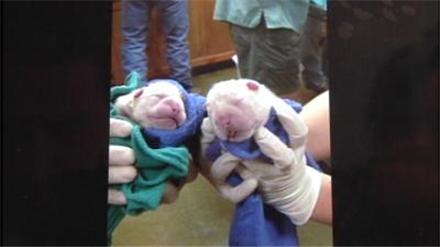 The incident occurred at the Weslaco Animal Clinic, where Jorge Nava brought a female English bull dog puppy, just days old, that was having breathing problems.  He’s claiming that they didn’t even glance in their direction, offered no help, and their lack of action is directly related to the death of the puppy.

The two puppies, delivered via C-section at a different vet’s office on Saturday had Nava overjoyed.  However, one of the female pups didn’t make it through the following day, when she lost her life to intestinal problems.

After the other puppy started showing breathing problems around 6:30pm Monday, Nava says he got the puppy to the Weslaco Animal Clinic straight away.

“He just looked at me, he had another dog in his hand, looked at me and said ‘we’re closed’,” said Nava.  “I said ‘man, can you take a look at her?’  He said ‘no we’re closed man and I have another emergency here.  And the dog he had in his hand looked like he could have spared five minutes to look at my puppy.”

Rey Blanco, the office manager at Weslaco says that the clinic had been kept open a full 30 minutes later due to multiple emergency visits that came in last minute that they didn’t want to turn away.

“We have one doctor here, she has two arms and two legs, she can only do so much,” said Blanco.

Nava believes the lack of compassion he experienced is what should be concerning people.

“I feel like they could have just taken a look at her and said you know what we’ll put this aside for a minute or two and we’ll try to help her out with her breathing.”

Blanco strongly believes the clinic is not at fault.

“What would have happened if the office was closed?  “What if the doors were closed and locked and there was nobody here?  Would we still be at fault?” asked Blanco.

The clinic is stating that Nava could have waited to be seen, but took off to another clinic shortly after being told the vet would not be able to see the puppy.  The puppy dies while he was on his way to another office.

The pups may not have survived the ordeal, but at least momma is still okay.