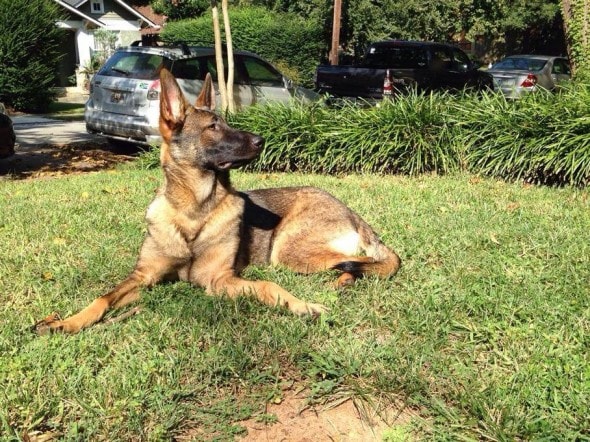 A family from Franklin County, Georgia is missing their dog after an accident on a quiet country road.  Her name is Georgia, and she is a one-year-old German shepherd.

On late Monday afternoon, the family was returning home to Atlanta when they were involved in an automobile accident.  Karen Love and her husband Dan were in their SUV, and said the whole thing happened in a flash.

“All of a sudden, Dan just said, he is going to hit us,” Karen Love said.  The SUV began to roll over and over.

“I know it happened, but it happened so fast, the next thing I knew I was upside down,” Karen Love said.

After the SUV stopped rolling, a couple of good Samaritans had pulled over to see if they could help.  They pulled Dan and Karen from the smashed up truck.  Somehow, they were unhurt.

The man driving the other vehicle was also pulled out, and kept away from the damage until highway patrol arrived.  It was later reported that he was charged with a DWI in the incident.

Once they regained their bearings, they realized they had no idea where Georgia, the dog, was.  She wasn’t in the SUV, and nowhere in sight.

Georgia had been spotted by other drivers on I-85, down by mile marker 155.  She was spotted again on Tuesday, running near Neal Road.  She still hasn’t been found, and the family fears for her safety and miss her very badly.

“I know it’s a dog, but when you have a dog as a pet it becomes part of your family and I really fear for her. I mean, I truly shake inside fear for her,” Dan said.

Georgia does wear a collar with her and her family’s name on it.  It also has an up to date address and phone number.  The microchip that she has also has valid and current information.