Nine-year-old Alle Nolan is lost without her service dog, Toby, and the autistic child’s mother says she can’t understand why someone stole their dog, only to kill it and dump it in their front yard days later.

“Communication is a big frustration for her,” says her mother, Kelley Nolan. She worries about her daughter shutting down in the absence of her companion. Nolan says that despite the fact that she can’t vocalize it, Alle is aware of his absence. 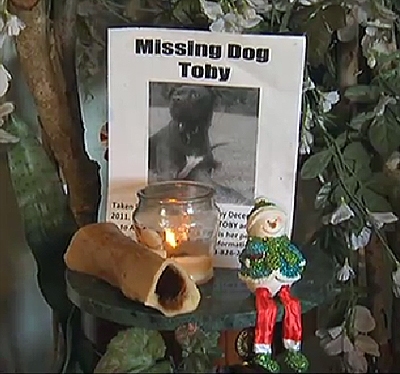 “She plays with his toys, and she has toys he played with her and she looks for him. She goes from room to room checking for him periodically,” Nolan said. “He slept with her at night. If she’d get up, he’d let us know. It’s things that we spent three years teaching him to look out for her. We trained him to be her best friend and second pair of eyes.”

The family spent days searching for their lost dog. That search came to a tragic end on Sunday when Kelley Nolan found Toby dead in her front yard. “He was half in the ditch, half in the yard,” she said, choking back tears. “There was still blood coming from his mouth. They had done blunt force trauma to his head, like a baseball bat.”

She sobs as she struggles to grasp the motive of Toby’s killer. “I just cannot understand how someone could be so cruel. Not only because he was our family member but because he was a special dog,” she said.

A $500 reward is being offered for information leading to the arrest of the person(s) responsible for Toby’s death. Those with information are urged to contact the Berkeley County Sheriff’s Office at (843) 719-4412.