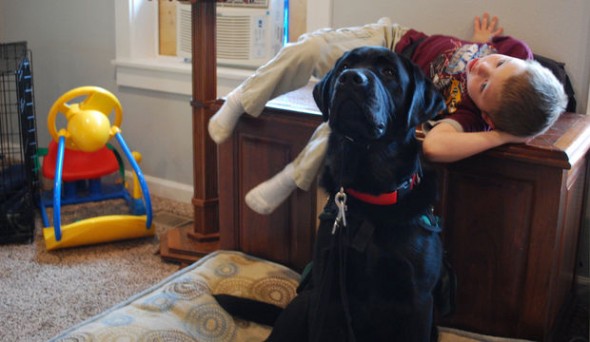 John McDonald has autism.  One of the symptoms of which is great anxiety in the little guy, and sometimes it becomes too much for him.  When this happens he will attempt to run home.  So, for his safety, his family adopted Kai, his service dog.  Kai keeps John from becoming too anxious, and thusly keeps him safer.

Kai seems to have mellowed John out a bit.  Ever since his family got him, John seems to be a bit calmer all around.  This is good especially for school time situations.  Kai is attached to John via safety tether, and if John decided to run, Kai would simply lay down, not allowing John to get too far.  If Kai notices that John is becoming too nervous, he knows how to calm him down.

The Sherwood School District was fine with allowing Kai and John to be together in class, but they told the McDonald family that Kai would need to have a handler while at the school.  The instructional assistants that help out in John’s special needs classes wouldn’t be allowed to fill that role.

“So, basically, either I would have to quit my job and go to school full time with my son, or I would have to hire a dog handler to attend school with John and Kai.  Neither are an option for me,” said Mrs. McDonald.

At this point, John is being kept home from school, and his mother has contacted an attorney to explore her options.

The attorney for the Sherwood School System, Rich Cohn-Lee, said that the school is well within their rights.  According to the federal Americans with Disabilities Act says a school district “is not responsible for the care or supervision of a service animal.”

They may not be totally responsible for the handling of the service animal, but things are not that cut and dry.

Cohn-Lee said, “It’s not simply a matter of all you have to do is handle the dog.  These aides have a tremendous burden to take care of the educational needs of the child.”

It would seem that the school district would be responsible for hiring someone to handle the dog according to Cohn-Lee.

“That’s a lot of money to pay someone,” he said.  He then added it would be cost prohibitive with multiple service animals in the school.

When the McDonald family was sending John to school in the Newberg School District, a special handler wasn’t needed for Kai to be with John.  The principal at the Dundee Elementary School John and Kai were attending at the beginning of the year had no problems at all.  An assembly was held to advise the other students and staff how to react to Kai being with John in school, and everything seemed to go without incident.

According to Dundee Elementary School principal Reed Langdon, “There was no hesitation from the staff.  The dog wasn’t an issue for us.”