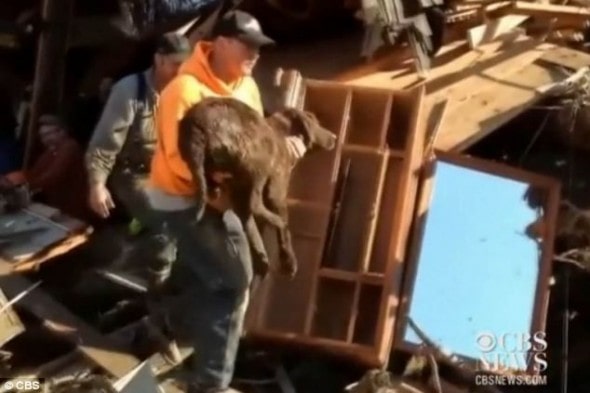 On Saturday March 22, 2014, the Kuntz’s home, located in Darrington, Washington, was destroyed by a deadly mudslide. The family was not home at the time of the disaster – they were out enjoying a baseball game – but unfortunately their Labrador named Buddy was home alone.

When the family returned, they found their home was 100 feet away from its base. It was a just a pile of rubble.

Devastated, the Kuntzes thought they had lost it all, including their dog, but the following morning when they came to recover some of their possessions, they discovered that Buddy was alive.

The Labarador had survived the mudslide and was trapped under all the rubble.

“We were looking through all the rubble and we heard the dog whining,” one of his owners, Quinton, told KBOI.

Immediately, family members worked together to pull the pet to safety.

“‘I just broke down crying, really happy that my dog was alright,” Quinton said. “I’m just shocked how well he did against my whole house falling on him.”

For now, the family and their beloved dog are staying with relatives. The Kuntz family is helping rescue other animals affected by the mudslide.