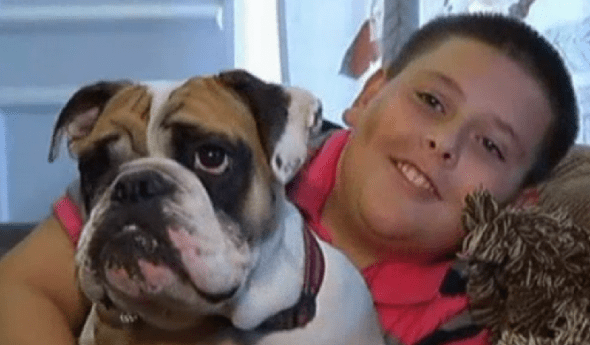 In May the Hancock family’s home was burglarized and one of the things stolen was their English bulldog puppy Maggie. They had given up hope of finding Maggie when a traffic stop led police to the missing dog.

On Thursday, police in Arlington, Texas made a routine traffic stop and found Scott Hancock’s iPad in the vehicle. After finding the stolen item police got a warrant to search the apartment of the driver believing more stolen items would be there. Police were right and when they arrived at the apartment there was Maggie.

On Friday the Hancocks were reunited with their missing dog, who immediately ran towards the family’s son Kyle. Even though the Hancocks had only had Maggie for about a week when she was stolen she immediately recognized and was happy to be back with her family.

“It was surprising,” said Kyle. “After four and a half months being with somebody else and only being with me for a week, I didn’t think it was possible that she could even remember me. So I was real happy that she still knew me.”