The Dickerson family, from Greenbrier, Tenn., have a routine they follow each and every day. They wake up, get the kids ready for school and then the parents set off for work, but on Tuesday, Feb. 24, 2015, something or better yet, a four-legged someone, was going to change their routine.

When Mr. Dickerson was leaving for work, he heard the cries of a dog coming from his yard, he went to check on the noise and found a puppy frozen to the ground underneath his shed. Immediately, Mr. Dickerson melted the ice and rescued the small pet. 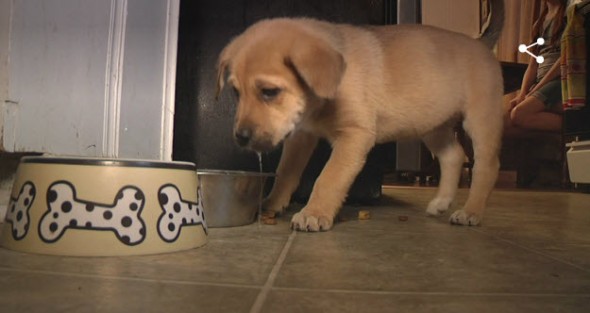 The puppy seemed hungry and the Dickersons took her inside to feed her. The dog went straight for the dog bowl and gobbled everything there.

For the family, finding unwanted animals in their Robertson County neighborhood is a common sight, but they hope whoever abandoned the little dog was in ” extremely dire straits” to do such act.

The Dickersons planned to find the dog a good home, but after their children became attached to the puppy, they decided to keep her.