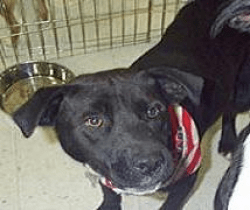 Not all dogs just “click” with a loving family within a short time of arriving at a rescue or shelter. For some, it is a longer process and one that can end in euthanasia if they are in the wrong shelter. Thankfully, for Fat Rat, he arrived at a shelter that believes that sometimes the best things just take a little time and are worth waiting for.

Fat Rat’s journey to his forever home began several years ago, on a warm June day, when his former family decided they could no longer afford to care for him. He was handed over to the Happy Hills Animal Foundation Shelter (www.hhaf.org) , in Randolph County, NC.

Fat Rat arrived at Happy Hills as a shy, extremely timid black American Pit Bull Terrier. The staff recognized that he would face many challenges in getting adopted due to his personality and the stereotypes associated with his breed. However, they saw something special in Fat Rat and agreed that they would invest the time needed in finding him the perfect, forever home.

Five years passed at the shelter for Fat Rat and he even gained a new nickname, Blackjack. Everyone continued to hold out hope that he would click with someone but it just had not happened yet. He remained very shy, but the staff and volunteers who truly knew him recognized that he was a very sweet dog.

One night, Fat Rat began to have a seizure! Staff and volunteers were frantically called to rush to the shelter in the middle of the night. They were dismayed-adoption seemed like it would be impossible for sure now!

Little did they know that Fat Rat’s seizure would be the very thing that would bring him to his forever family. While at the Vet’s office for treatment, Fat Rat gained the attention of another client. In the end, it was this encounter that led Fat Rat to find his place in the loving home of that client.

Fat Rat’s seizures are now under control with medication and he loves to spend his time curled up with his doggie brother in their home. He is a very well-behaved dog and has had no problems adjusting from being in a shelter to family life. His only behavior challenge: He loves to drink from the toilet! However, since this could be said of many dogs, it seems that Fat Rat is doing pretty well.

Happy Hills Animal Foundation (www.hhaf.org) was born 31 years ago out of a dream for a better option for helpless and homeless animals. The facility reaches out both to the local community and also throughout North Carolina.

Happy Hills is currently one of only two state licensed shelter facilities in Randolph, NC. The other shelter is operated by the county and is overcrowded, with a euthanasia rate of over 85%!

Happy Hills’ mission is to furnish meals, safe shelter, veterinary care and love for abandoned and abused animals. They find responsible and loving homes for as many animals as possible and are committed to a no-kill philosophy, with animals staying in their care for as long as it takes to find a forever home. They hope that through humane education and children’s programs, as well as advocating for spaying and neutering, they will reduce the number of abused and abandoned animals.