A joint collaboration of several rescue organizations resulted in 17 puppies and dogs being rescued from a puppy mill in Ohio and transported to New York for rehabilitation and adoption.  The rescue effort was spearheaded by the Companion Animal Placement Program, who collaborated with Dog House Adoptions and the Healthy Pet Center, with additional support from Pet Connection’s Steve Caporizzo, Pack Ethic , and Homeward Bound.

According to a report by Dog House Adoptions’ Kim Clune, 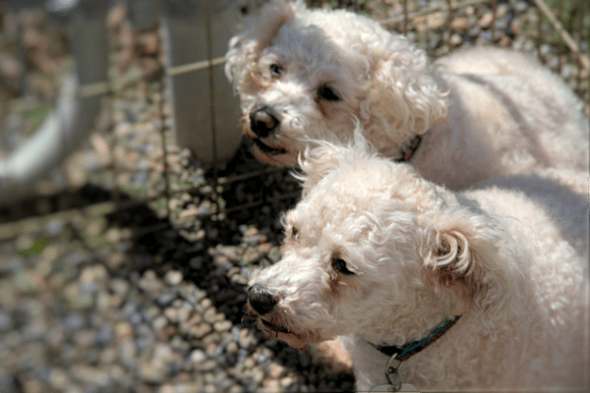 “17 dogs arrived stacked from floor to ceiling in the back of a white minivan-Yorkies, Bichons, Poodle mixes, Beagles and Beabulls (Beagle/Bulldog mixes). Some were packed three to a crate, enduring the cramped, smelly quarters for a twelve hour transport. Confinement and filth was nothing new to them. These were puppy mill dogs.”

Once the dogs had arrived at CAPP (the Companion Animal Placement Program) and at Lisa and Steve Neal’s Healthy Pet Center, in Delmar, New York, their new lives of freedom were able to begin.

“Soft whimpers were heard as the crates were unloaded. A Beabull stuck his head through the cloth crate door in search of what his new life would bring. Two female Bichons dripped milk for litters pulled from them at the mill, disconnected from all they know and the babies they loved. A Beagle, too fearful to come out on her own, had to be coaxed by two volunteers. Her reluctance was quelled when, within an hour, every dog was stretching their legs, basking in the warmth of the sun, and lapping up cool, clean water.”

Though it took time to convince the dogs and puppies of their good will, the volunteers and staff slowly began to see improvements. However, some behaviors were ingrained from growing up in horrid conditions.

“After a lifetime of walking on chicken wire cages, the small dogs often raise one foot and then the other, even on solid ground-an ingrained coping mechanism of relief for what has been a long-term discomfort.”

The kindness of those working with them is slowly winning over the dogs’ hearts, though, as they begin to see that there are humans worth trusting. Sadly, some continue to have medical problems from their experience being bred repeatedly or from being born into such neglect.

Luckily, these dogs and puppies have bright futures ahead of them as many organizations work to find them loving homes. Many of the younger ones are at a perfect age for reward-based training and will fare well. And even though the recovery may be longer for the older and more traumatized, they should do well in a loving and patient family.

However, these dogs are just a few of the many that are victimized by the puppy mill industry. Unfortunately, many puppy mill dogs’ stories do not end so happily and they never recover or get rescued. However, it will only be because of the commitment of dog lovers nationwide and as a result of other such collaborative efforts that we can look forward to many more puppy mill dogs rescued.