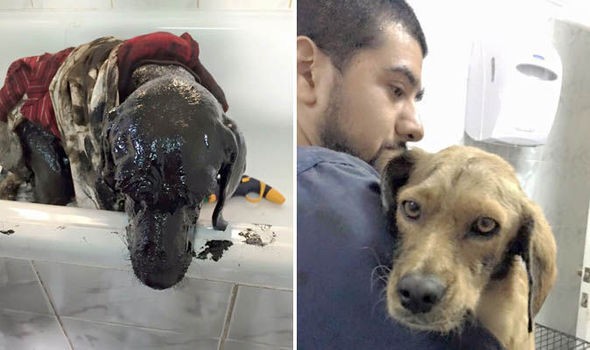 A father and son team are heroes today.  The pair came across a poor dog stuck in a pit of Tarmac, or a tar pit if you will, who was apparently left to die.  They happened upon the dog on accident, but were glad that they could help save a life.

The pair came across the dog just outside of the city of Antofagasta, in northern Chile.  Jhonny Alquinta and his son Jhonny Carrizo happened to be walking past the pit when they could hear a strange commotion going on.  They went over to where it was coming from to see a trapped and very scared dog, completely covered in sticky tar and stuck in the pit.

The two were horrified at what they saw.  The dog was trying desperately to keep her head above the bubbling ooze, struggling with every last bit of effort possible.  They sprang into action, thinking that they would do anything and everything to get the out of there and to safety.

It was no easy task getting the dog freed from the tar pit.  In an interview given to local news outlets, the young boy’s aunt shared what the rescuers went through trying to save the dog. 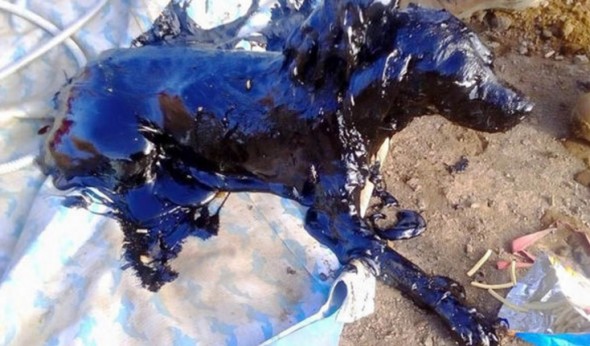 “At first they were scared, but when she lifted her little head up they quickly went to help her,” said Rosmary Carrizo.  “It was a huge effort but they finally got her out of the pit.”

Then the two got the dog to a vet clinic.  She was cleaned off and went through a full medical evaluation.  Surprisingly, even with everything the dog had been through, she was in pretty good physical health.

The attending physician at the animal hospital said, “We managed to get the asphalt out of most of her fur.  She has eaten and drunk a bit and is slowly getting better.  Now we will do a blood-test to see if her organs have been affected.”

Her rescuers have decided to adopt her and make her a full time member of the family.  They believe that someone left her in the tar pit on purpose, but they are determined to show her that not all humans are terrible, and can show much love and affection.