Concerned by an outbreak of illnesses in at least 600 dogs, government health officials are asking for public feedback to assist in the investigation of poisoning caused by chicken jerky dog treats imported from China, and have for the first time made their findings available to the public. 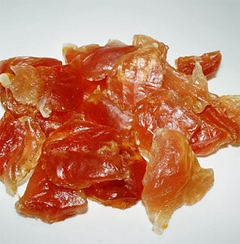 Obtained by MSNBC through a public records request, the FDA report is the first to name specific brands most commonly cited in poisoning cases. Kidney failure and a variety of ailments have been tied to the contaminated treats, according to data collected from both consumers and veterinarians. The three brands named are:

The complaints were collected from October to December 2011,  and were submitted by consumers in cities from California to New York. Given the large number of incidents in a relatively short time frame, the FDA intends to continue collecting and analyzing data regarding the poisonings.

“We still invite owners and veterinarians to submit complaints and samples,” said Siobhan DeLancey, an FDA spokeswoman. “The more information we have, the more likely we can find a link.”

Consumers who suspect that their pets have been poisoned by contaminated treats are encouraged to report illnesses to the FDA’s pet food complaint site.