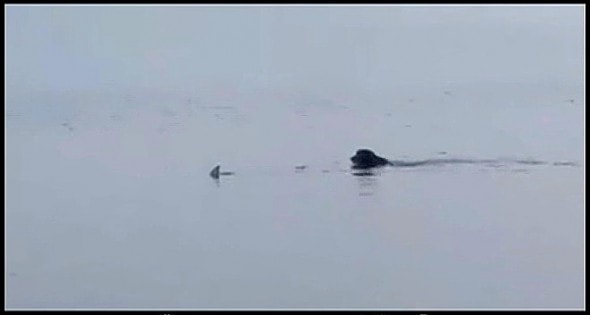 Last week a chocolate Lab flabbergasted Florida beachgoers when she swam after a shark.  Onlookers helplessly watched what they thought would surely be the dog’s demise, but Tootsie surprised everybody when she escaped the encounter unscathed.

Karin McArdle was at Crystal Beach with her girl Tootsie, who loves swimming and exploring for aquatic life.

“Tootsie is a staple on the beach,” McArdle told Bay News 9.  “She’s very inquisitive.  She sees the dolphins swimming out there, she likes to swim toward them but they’re too far out.”

The adventurous pup can easily spot a dolphin fin and knows they aren’t dangerous.  But her curious nature could have cost Tootsie her life when she began following a shark.

“She was swimming underneath the pier looking for her fishies,” McArdle explained.  “And some people said, ‘oh look, there are a couple of sharks out there.’”

The woman looked on in horror and called for Tootsie, desperately hoping the dog would heed her.

“Everybody on the pier started screaming, ‘Tootsie, Tootsie, no!” McArdle said.  “She just showed no fear, and was not listening, and she’s normally very obedient.  I thought, ‘oh my God my dog’s going to be gone, going to be fish fodder, shark bait!”

Eventually Tootsie listened to the pleas from shore and turned around.

“She went up to the tail of that shark, sniffed it, said ‘ok,’ turned around, and that shark just swam on.”

She hopes Tootsie has sated her curiosity with the more pernicious ocean life.