* DO NOT watch this video unless you want to ruin your day, or possibly your week. I’m doing my best to offer fair warning for what can only be described as a horrific scene. That said, turning a blind eye will never put a stop to acts such as these, so it’s time for those of us with the stomach for it to step up spread the word, and track down this disturbed human being.* It’s possible that I’ll remove this post in a few days, It’s that awful. 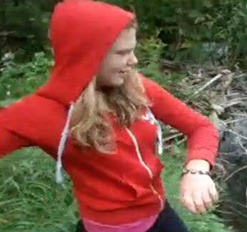 As much as I don’t want to be the bearer of too much bad news, this was troubling  enough to merit a mention. Apologies if it has darkened your day. Just for the record, it has ruined mine. I recommend starting with this Facebook page if you want to try to help. Disregard those who are tossing around random names without evidence – there is a bit of “witch hunt” hysteria developing.

An excerpt from the Herald Sun: Footage of another terrible case of animal cruelty has once again made its way online, this time a young woman is seen throwing puppies into a river one-by-one. The 44-second video, which appears to have originated in Croatia, shows the young blonde woman hurling six puppies out of a bucket and into the water. One of the puppies is thrown so high it narrowly misses the rocks alongside the water.

The footage has sparked online outrage throughout Facebook and the 4chan forums, the group of people responsible for tracking down the British cat-dumper last week. “I would love to see that girl get tortured to the worst extent,” an anonymous user wrote.

“The problem isn’t just the girl in the video, it’s also the jerk who was filming it, and who posted it online,” another angry poster said. The video was uploaded on LiveLeak.com last night and has already had more than 31,000 views.

PETA Asia spokesperson Ashley Fruno said the public would be surprised at how often this happens. “PETA gets reports daily of similar animal cruelty cases,” she said. “Video-sharing sites have unfortunately allowed uncaring individuals to publicise cruelty they inflict on animals.”

The clip comes only a week after a British woman was captured dumping a cat into a bin and identified as 45-year-old Mary Bale. It’s unknown whether the puppies had previously been tortured before being thrown into the river.

One last warning – you really may be better off to skip this video. I offer it only for those who can use it to call others to action. Youtube continues to pull it down, so if this version goes offline there is another available at LiveLeak.

34 thoughts on “Find This Woman: Puppy Killer Caught on Camera”