Remember Fiona, the 11 year old poodle mix who was found matted and dirty, infested with fleas, as well as blind in both eyes back in March?  Well, thanks to the help of thousands of compassionate supporters she is doing well and has just been named the ASPCA’s “Dog of the Year”.  It was Audrey and Eldad Hagar, founders of Los Angeles-based animal rescue group Hope for Paws, who first came to Fiona’s aid and raised funds from all over the world to help her.

Initially terrified, she sat frozen still in her own urine as her rescuers approached.  Remarkably, other than being blind she was uninjured and once she was cleaned up and rid of her fleas she was a different dog.  The sight in one was eye was restored through surgery soon after, and Fiona was adopted by Michele and Chris Gentry of Los Angeles. 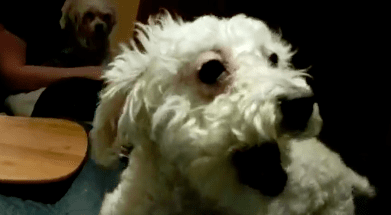 Now she is happy and healthy and her story is a true testament to what an animal can endure, and how important a second chance can be.  She is in a loving home getting the love every dog deserves to have, and giving it right back to her adoptive parents.  The trio will will attend an awards luncheon in New York on Nov. 8 to celebrate the tribute.  There are thousands of dogs just like Fiona waiting for their second chance, hopefully all of them will be so lucky as to find their forever home soon.