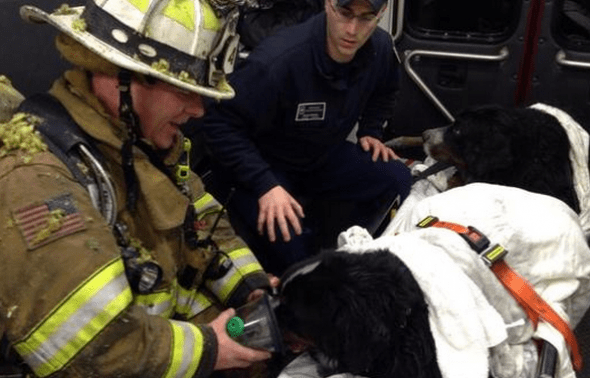 Lieutenant Rick Trudeau of the Fairfax County Fire & Rescue helped save several dogs from a fire on Monday. Now the dog loving firefighter is helping to raise money to pay for the dogs’ medical care.

“I go just as hard trying to save a dog as I would a human being,” said Trudeau.

Trudeau, who owns two Bernese Mountain Dogs himself, was driving by the destroyed home a few hours later when he spotted the owner searching for his wallet. He stopped to see if there was anything he could do for the man.

The homeowner explained to Trudeau that the vet bills for the dogs were quickly adding up and they had nowhere to stay now that their home was gone. Two of the dogs are doing well with their recovery, but the other two continue to struggle, including one that is covered in burns. Trudeau wanted to help.

“Soon as he said that, it struck me that I can probably help with this,” said Trudeau.

He set up a fundly.com donation page and already almost $10,000 has been raised. The medical bills for the dogs continue to rise though. Dr. Colleen Mullally of the Regional Veterinary Referral Center says the bills can easily reach $20,000.

To make a donation visit the fundly.com page set up by Lieutenant Trudeau.