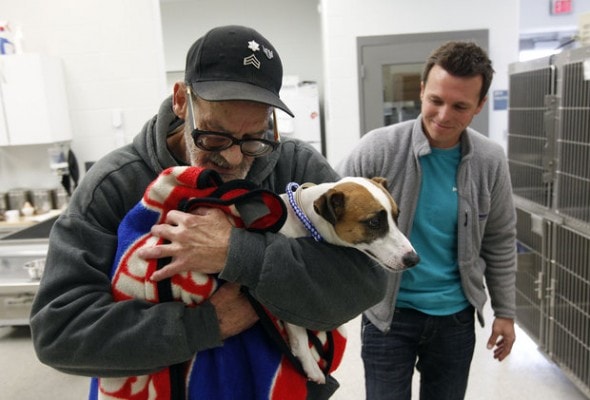 Last week a Jack Russell terrier named Nubbin broke his leg while in pursuit of a groundhog. Unfortunately his owner, Jessie Brothers, couldn’t afford the complicated surgery required to save Nubbin. That’s when Lexington firefighter Anthony Johnson stepped in to help.

Last Wednesday, Nubbin caught his left hind leg in a fence while chasing a groundhog near his home in Lexington, Kentucky. The ordeal broke Nubbin’s leg in at least three places. Brothers took Nubbin to a nearby vet clinic where he learned the surgery needed to repair Nubbin’s leg would be expensive.

Without the surgery Nubbin would have to be put down. Brothers is a retired laborer on Social Security and is dealing with several health problems. Affording the surgery wasn’t an option for him. Nubbin is all the family that Brothers has, the thought of having to put Nubbin down caused him to collapse in grief at the veterinarian’s office.

Paramedics were called when Brothers collapsed. One of the paramedics who responded to the call was firefighter Anthony Johnson. When he arrived on the scene Brothers was on the floor moaning “my dog…my dog.” Johnson is a dog lover, and once he heard the story of Brothers and Nubbin he felt compelled to help. Brothers was taken to the hospital and Johnson started working to help Nubbin.

Johnson made a phone call to Dr. Barry Hays at Locust Trace clinic and explained Nubbin’s situation. Johnson told the vet he would pay for Nubbin’s surgery. Hays agreed to take on the surgery and performed it Thursday afternoon.

Nubbin made it through the surgery successfully and Hays says Nubbin has about a 75 percent chance of recovering, but complications could cause him to lose his leg. “It was a difficult operation because we had pieces to deal with – the tibia was completely fractured.” The next two weeks will be crucial in Nubbin’s recovery.

Brothers was driven to the clinic by his neighbor Mary Sweeney. “The dog is all he has; he has no family as far as I know,” Sweeney said. Sweeney has also agreed to help look after Nubbin as he recovers from his surgery.Johnson was there to see Nubbin and Brothers reunited on Friday at the clinic.

“Mr. Brothers has several problems going on, but the most important thing to him was his dog,” Johnson said. “I just couldn’t walk away from him. I was involved in the situation, and I wanted to help in any way I could.” Johnson isn’t alone in wanting to help. Mike Tracy is a retired major with the Lexington fire department. He heard about Nubbin’s situation from his daughter who works at Locust Trace. He has agreed to split the cost of Nubbin’s surgery with Johnson.

“I just want to thank everybody for everything they’ve done,” Brothers said. He is glad to have his family back. “He’s stayed by me; he keeps me hopping. He’s the only thing I’ve got. If it wasn’t for him, I doubt I’d even be here.”

When people heard of Nubbin’s story many wanted to help donate. On Monday, a fund was established by firefighters to help Brothers and Nubbins. Anyone wishing to contribute to the fund should make checks to FOF Public Education, and specify the donation is for Jessie Brothers. They can be mailed attention of Ed Davis: Third Street Fire Station, 219 East Third Street, Lexington, KY 40508.