A Miami firefighter is a hero today, after jumping into the Rickenbacker Causeway near the William Powell Bridge.  The dog was stranded out in the bay on a piling this morning, and got caught up in a rope that was attached to it.  Had Lt. Jose Almeida not acted as quickly as he did, this story may have had a very different ending.

According to Miami Department of Fire-Rescue spokesperson Capt. Ignatius Carroll Jr., there was absolutely no hesitation by Lt. Almeida upon seeing what was going on.  The poor panicked dog was not only fearing for her own life, but the lives of her unborn pups as well.  Lt. Almeida just considered another day at work for him.

“Just like any human rescue, we don our equipment and went in the water to get her,” said Lt. Almeida.

Lt. Almeida got out to where the dog was quickly, and got her freed from the rope right away.  As one would expect, the poor dog was terrified by everything and started resisting rescue.  She even snapped at her rescuer a few times, making rescue even more complicated.

“She swam to the piling,” Almeida.  “I tried to grab her, but like I said, she tried to bite me a couple of times and she jumped off.  I jumped in after her.  I was trying to keep her swimming.”

Lt. Almeida decided to let her swim her way to shore, keeping close behind her just in case something went wrong.  It’s wasn’t the fastest or easiest rescue that the fire-rescue crew had ever seen, but they stayed determined to help; especially Lt. Almeida, the hero of the day.

Unfortunately, as soon as the dog got to shore, she took off in a direction away from her rescuers and out of sight.  They tried to follow her, but she was simply too quick.  One could only imagine how this poor dog got stuck where she was.  Law enforcement and animal control officers are still out searching for her as this article is being written.

Be sure to check back with Life With Dogs, as we will passing along any new information as it is released. 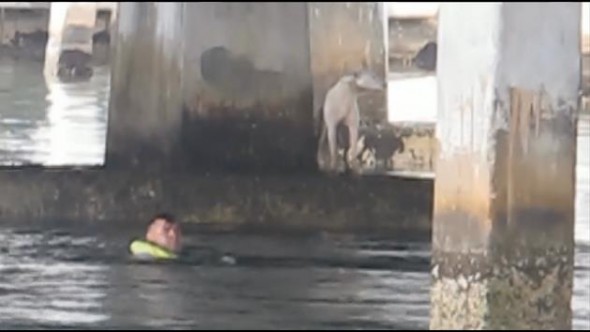