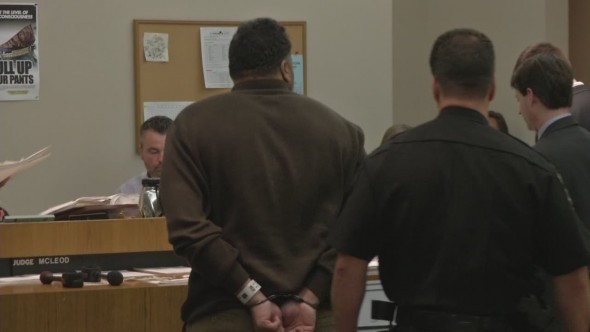 Back on 1/12/2016, we brought you a story about a man from Buffalo, NY who had been convicted multiple times on charges of dog fighting.  Edward “Boo” Bishop was back in court today to face a judge, and received the maximum for his crimes.

Judge Thomas P Franczyk gave Bishop no less than one and one-third, to four years behind bars.  He will also be placed on a watch list, and must wait a minimum of ten years before he can even be around animals of any kind, least of all dogs.

Judge Franczyk elaborated on his ruling from back in January as well.  He made mention of the prior convictions, and address the fact that Bishop was actually facing many more charges than what he was convicted on.  He was at first facing at least on felony charge for each of the dogs removed from his property.

“This was not just the Shady Rest retirement home for old fighting dogs,” said the judge.  “One would expect to see that amount of hay on a farm but not at a residence in the city of Buffalo.  It would indicate something more was going on here.”

As previously stated, this is not Bishop’s first offense.  He was convicted of robbery in the 1980’s, and has other dog fighting/animal abuse charges as well.

“It seems that you never left it,” the judge said.  “Unless you live on a farm or live in some mansion it is unusual to have so many dogs in one place unless something else is going on.”

Nicholas Hicks, Bishop’s lawyer, feels that the charges were unfairly “stacked” against his client, and that the extreme, maximum sentence should and will be appealed.

Justin T. Wallens, chief of the District Attorney’s animal cruelty unit disagreed.  He said that Bishop has been given an opportunity for controlled or supervised release, and it’s done nothing to stop him committing crimes.  Many times, the same crimes he’s been charged with and convicted of before.